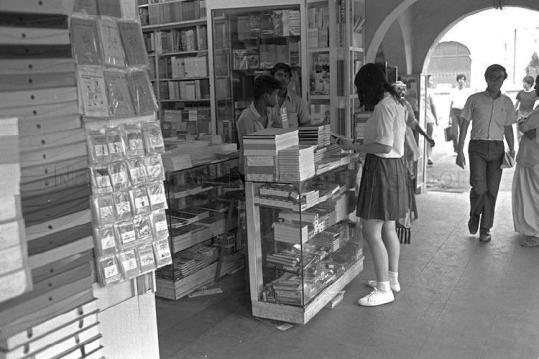 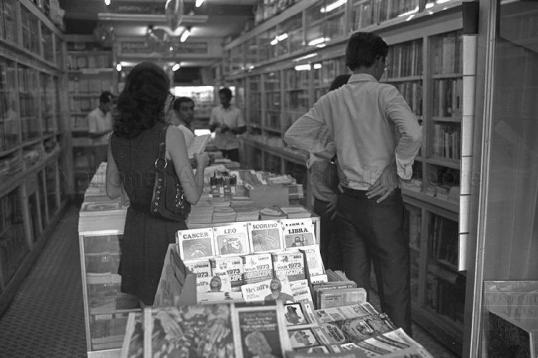 Numerous and varied are the trades and industries which have come to stay in Singapore as a direct result of the slump during recent years.  Malaya is no more the land “flowing with milk and honey” and extravagance in the country is a thing of the past.

One of the most interesting, and one which supplies the intellectual needs of the educated, but poorer classes, of all communities in Singapore is the trade in second-hand printed matter which is now a very flourishing line of business in the city.

Located at the top end of Bras Basah Road there are at least ten such establishments today and all through the day and the evening until closing time customers in search of something to read may be seen looking through the amazing collections.

Each second-hand bookshop is a veritable library in itself and the stocks embrace practically everything in the line of text books, fiction, magazines, penny papers, periodicals and the thousand and one other publications with whch the reading world is flooded today.

There are books and magazines for almost every class of reader and every taste.  Instead of paying in dollars or going without the joy of reading, a wide range of printer matter is to be had at these second-hand bookshops and the price you pay is reckoned only in cents!

With the welcome advent of these shops in Singapore, reading is no more the very expensive pastime it was in prosperous days gone by.   Hundreds who were regular patrons of the big bookshops – dealers in new books – in the city, now hard hit by the slump and for other economic reasons, spend their leisure hours in Bras Basah Road looking through the amazing  and varied collection of second-hand literature.

School-boys form a considerable portion of the customers of these flourishing dealers in second-hand books.  Before and after school hours groups of them may be seen in these shops searching for “school-boy thrillers,” detective and cinema magazines and stories of adventure and the Wild West, so dear to the heart of average modern youth.

Their parents are no more in a position to afford new books and the pocket money allowed to school children is nothing like what it used to be.  Instead of having to pay twenty or thirty cents or more for a “thriller” the school-boy today gets the same mental thrills for three or four cents.

Second-hand school books and text books are also to be had and many a poor parent, for whom the education of his offspring is nothing less than a sacrifice, finds a great measure of relief in these school authorities were by no means helpful in this as invariably brand new books were insisted upon.

These Bras Basah Road second-hand book dealers do not experience any difficulty in keeping up their stocks in slump-ridden Singapore.  Victims of the slump find ready buyers in them and old collections lying covered with dust in shelves and corners are now converted into much needed money.

Public auction rooms and auctions in private homes, so frequent and regular in Singapore, are haunted by the second-hand book dealer and “lots” usually unwanted by the others are knocked down bargain by him.  Thus he is never at a loss to supply the needs of the reading public with almost anything at a fraction of the original cost.

Since I went to secondary school, I did not buy new text books because the prices of the books were not cheap.  As my family was poor and I tried my father not to spend too much money to send me to school.

Before the school opens and I was given the book-list by the school, I would approach my schoolmates who had those books which they do not need to use them for a higher standard or are graduated and left the school.  These kind and generous schoolmates sold the books to me at very low price or given me the books free of charge.

With other classmates who wanted to save money for our parents, we would then go to the second-hand book shops in Bras Basah Road.  Sometimes we were lucky to buy all the required text-books in a day.  At other times, if we were unlucky, we would have to look for the books at different shops on several days or weeks to get hold of all the necessary books.

These are my personal schooldays memories and experiences in the 1960s.  Of course, our classmates with parents who can afford to buy all the new textbooks for them would not have to go “second-hand textbook hunting” when school opens.

The archived photos of the bookshops at Bras Basah Road, courtesy of the National Archives of Singapore. 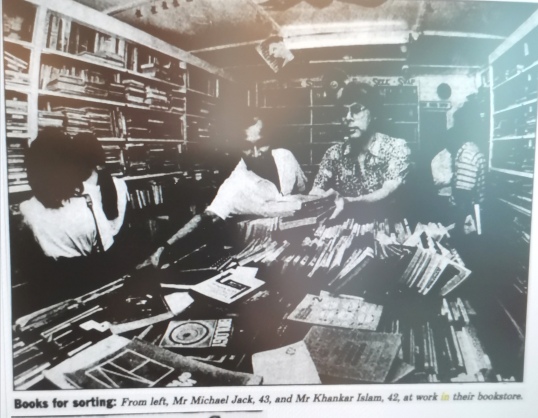 A page from the past

It’s dowdy next to the new National Library, but Bras Basah Complex is still the place where students and book-lovers go, and there are plans to refresh it.

Sitting in the shadow of the glass-and-steel National Library, Bras Basah Complex looks run-down in contrast.  Built by the Housing and Development Board in 1980, it was once dubbed the City of Books because of its five storeys of more than 50 bookshops.

Indeed, book lovers with the patience to prowl along musty aisles will still find the building a treasure trove.  There, they can get anything from second-hand Nancy Drew mysteries published in the 1970s for 50 cents each to the latest issue of cult design magazine Wallpaper.

But with the rise of mega bookstores like Borders and Kinokuniya in the 1990s, the complex today is a far cry from its heyday.

Back in the early 1980s, it was buzzing with students because of its numerous bookstores.  It was also a centre for xin yao, which is Chinese music written by Singaporeans.

At the height of the movement’s popularity, hundreds of students would gather at the complex’s open concourse to catch their favorite musicians, who included Ocean Butterflies music director Billy Koh and singer Eric Moo.

Mr Yeo Kar Han, 36, a senior operations manager with Popular Book Company, recalls spending many of his Saturdays at those performances.

“But times have changed.  People now want to go to places that are air-conditioned, where they can shop and then go for food or a movies,” says Mr Yeo, who oversees the Popular outlet in the complex, which has been there since the latter was opened.

Another long-time tenant is Tecman, one of Singapore’s largest Christian bookstores.  Owner Jane Tan, who is in her 50s, remembers how it used to be a magnet for shoppers.  “Everyone had to come here to get books, and it was very packed and busy.”

The complex is also home to many Chinese language titles sold at stores like Shanghai Book Company, one of Singapore’s oldest bookstores.  Mr Ma Ji Lin, 53, the managing director of the 2,900 sq ft store, says: “We have been in business sine 1905, and have been in the complex since 1980.  Why do we like it here?  Because people know this is where you go to get books”

Bras Basah was synonymous with books even before the complex was built in 1980.

In the early part of the last century, Bras Basah Road along with Victoria Street and North Bridge Road, was lined with bookshops catering to the many schools in the area, including Raffles Institution, St. Joseph’s Institution, Catholic High and Convent of the Holy Infant Jesus.

Popular (then called World Book Company), Shanghai Book Company and MPH started in this area, and its prestige as a book hub was raised when the old National Library in nearby Stamford Road opened in 1960.

Mr Wong Kai Hong, 52, who studied at RI when it was at the site where Raffles City now stands, remembers buying comics like Beano and Dandy there.

Mr Wong, the CEO of retail consultancy TR21, recently signed a contract with the Bras Bash Complex Merchant’s Association to help restore the ageing centre to its past glory.  But he adds:  “It is true that as an old HDB building, there is only so much improvement we can do.”

Any makeover must also consider the needs of the residents who live on the sixth to 25th floors of the complex.

“However, we can make its HDB ambience a characteristic of the place rather than a setback,” says Mr Wong.  He foresees books and arts and craft fairs beinbg held at the atrium.

He and the merchants want the complex to build on its reputation for specialty books, as well as an art supply destination, as there are about 20 such stores there.

Already, students from the many nearby tertiary institutions have boosted sales.

Mr Abdul Nasser, 43, who runs Basheer Graphic Books, which his father Basheer Ahamad set up in 1992, says the company has no plans to move, citing the central location, lower rent and reputation for books and arts supplies.

“Bras Basah is an ugly duckling compared to the surrounding buildings,” he says, “But actually, having a contrast between old and new is what makes a city interesting.” 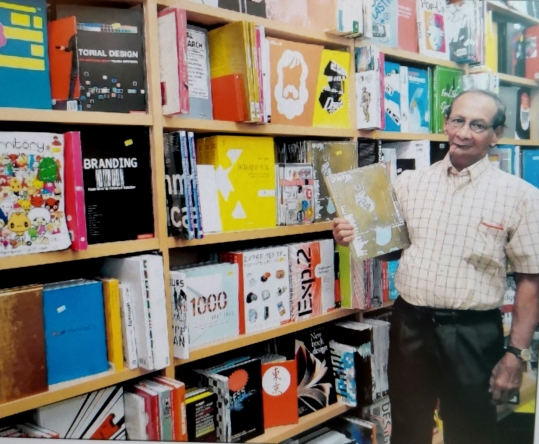 School textbooks which the owners do not need them could give to those who need them.  Please reuse and recycle these books.  Don’t throw them away.

I have taken the initiative to create a new group ‘Second-hand Book Service’ on Facebook.  Your respected suggestions and comments is much appreciated.

Please join the group if you find it useful and helpful to everyone.  Thank you.