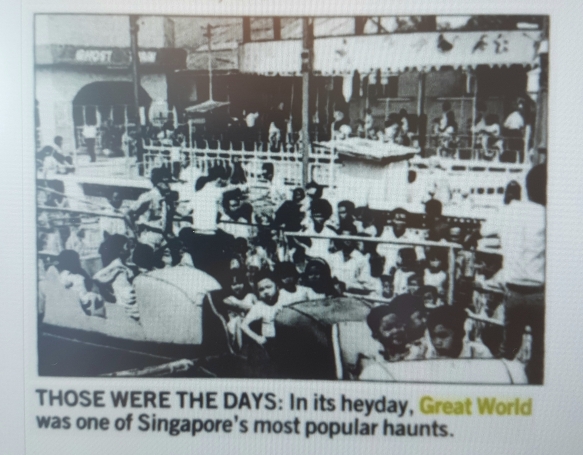 Oh, so many worlds apart! 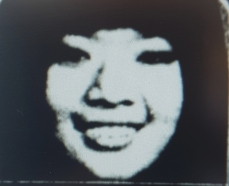 In a very special corner of my childhood are memories of some old toys, some noisy playmates, and some evenings spent in what seemed like wonderland – places that shimmered with lights and people, that whirled your child’s soul into fantasy and laughter.

We knew them as The Worlds – Great World, Happy (or Gay) World, New World.  They were symbols of all that you associated with fun, excitement and pure and simple pleasure.

Once you were within their grounds, anything could happen – you could go flying through the air on an aeroplane trip, become an intrepid explorer in your boat on a swirling river, or have the life scared out of you by ghosts and skeletons and horrible monsters.

Today, the Worlds are not what they used to be.  Great World, which ceased operation in 1964, is no longer great.  By night, it is ghostly and deserted, pitch-black except for cases of activity like the cinemas and the penny arcade.

By day, office workers traverse its grounds to reach lunchtime eating places in nearby buildings.  The amusement machines – the miniature aeroplanes, the whirling jet rockets, the merry-go-round – stand as monuments to better times.  Some are coated with rust and are slowly falling apart.  Grass sprouts from the tracks of the miniature train. 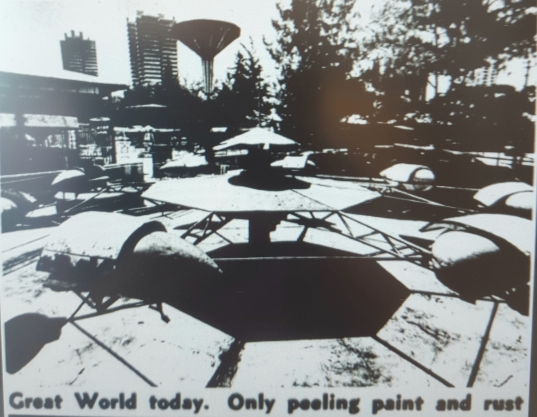 A watchman tells you that the place comes alive once a year, for a month, during the Chinese New Year festivities. 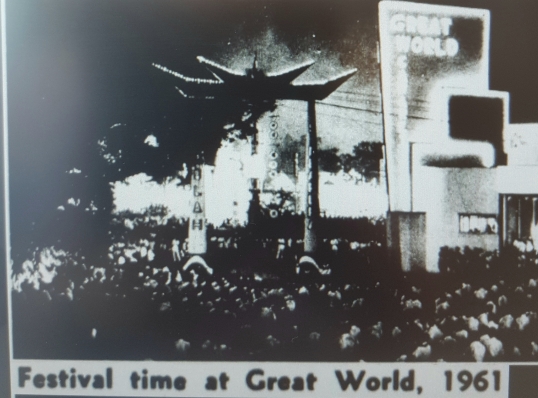 New World and Gay World still survives, though they no longer live up to their names either.  New World is mostly shops, where business, if stallholders are to be believed, is largely slow.  There is still a weekend crowd, however, that pumps some life into the park and the shopkeepers’ pockets.

And there is still some entertainment.  Seated before a wayang-style stage are a couple of dozen people, watching a female singer, obviously inexpert and ill at ease, trot out a Mandarin pop song.  The Bunga Tanjong dance hall, with its dim interior  and kebaya-clad hostesses, still operates. 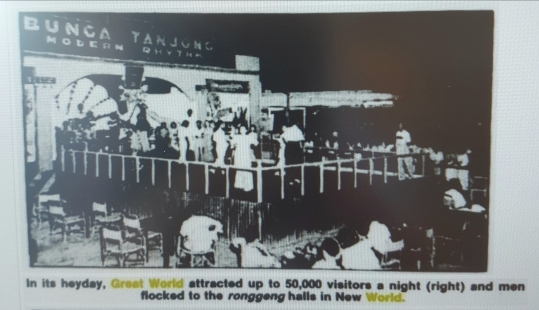 Both the New World and Gay World, still charge for admission at the gate, at 20 cents per person, and cinemas function with its fairly good crowds at all three Worlds.

Their presence is much needed – they act as booster shots in the arm for the rest of the park, disgorging patrons who may stroll a while before leaving, buying or eating something in the process.

Gay World is by far the liveliest of the three.  The crowds at the Sin Hua Emporium are like those at other empriums around town, and the band at the Pesta Tarian Ria belts out heavy music, watched by a crowd of appreciative teenages.

The stadium still functions – you can hear people cheering from inside, watching the Fourth National Pugilistic Championships.  There are even hoopla and coconut-shy-type stalls, and a pool hall.  And perhaps most heartening of all, the ferris wheel still spins, and children still squeal excitedly, although the long queues of the past are missing. 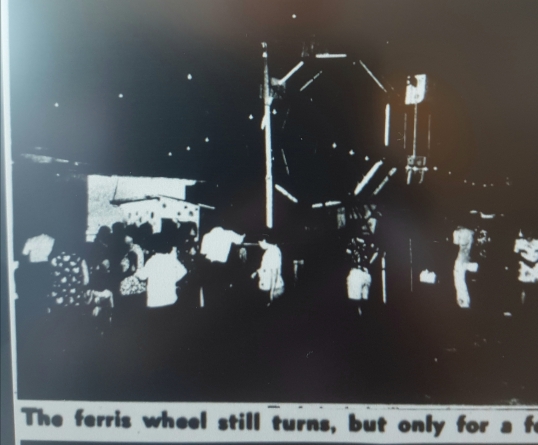 The people managing the worlds are reluctant to talk about them, for fear probably that the inevitable comparisons between past and present conditions might scare away the shopholders who are still around.

Great World and New World are both owned by Shaw Organisation, the first directly, and the second through New World Pte Ltd.

Plans were periodically announced from 1971 to 1975 to turn Great World grounds into a shopping, housing, business and entertainment complex in the style of a famous Hawaiian tourist centre, at an estimated cost of $100-$300 million.

When completed, the complex will almost be a self-contained “town,” say the owners.  But the plans and the blue-prints, apparently, will not be finalised for another six months yet, according to a spokesman.  Once begun, the entire project which will be built in three stages will take about six to seven years to complete.

The future of New World is somewhat more hazy, and the owners are reluctant to discuss whatever plans they might have.  A new revue hall, with facilities for both nightclub-style foreign and local artistes, will be opened soon, they say. 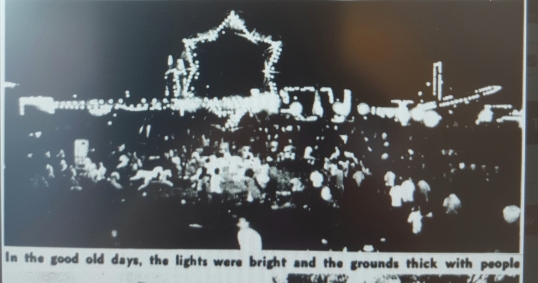 Gay World was taken over by the Government in July 1973, and underwent a facelift for the Seap Games in August.  The Stadium now is managed by the National Sports Council.  The future of the park is unknown.

The numbers of people visiting the parks have changed because life has changed.  Singaporeans’ life styles have grown away from the old forms of entertainment towards new forms.

Shopping for instance, has become the great new recreational experience, a well-known sociologist says.  A student of his, when asked what she was planning to do during university vacation, replied:  “Oh, nothing much, just some shopping.”  That we have become a great consumer society is undeniable.  Look at the people-filled giant shopping complexes.

Then there is television, which keeps people glued to their living rooms for most of the night.  Television is a family entertainment too, like the amusement parks used to be – children watch cartoons, parents watch the new local documentaries and the whole family watch the police-detective programmes.

According to the Survey Research Singapore Media Index, in fact, there were 1,205,000 people of 15 years and above watching television in a average week last year.  An average day alone grossed 774,000 viewers.  And that’s not counting children under 15.

Outside the home, the range of entertainment has greatly increased in recent years.  Where, in the early ’50s and 60s, were there rollerskating and ice skating rinks, a sociological garden, a bird park, cable car rides, or specially constructed swimming lagoons?

Today, there are phenomena like large department stores in which you can shop, eat, market, and entertain your kids with coin-operated amusement machines, all at the same time.

One Japanese-own department store in town has a special amusement are4a, where the children of busy shoppers can happily spend their time riding spaceships or “flying” on the backs of their favourite TV cartoon heroes.

Parents are thankful for stores with amusement machines, they say.  It makes shopping or marketing a whole lot more convenient when their children are happily accepted.

Do they take their children to amusement parks these days?  “Well, not really”; “perhaps once in a blue moon”; “so many other things to do”; “waste of money”; “what for, when they can have rides in a shopping centre instead?”; “we stay at home mostly.”

And they do.  Stay at home, that is.  A University of Singapore Sociology Department research team recently completed a survey of the activities and habits of 400 lower-income HDB families.

Their results are not officially released as yet, but they say that 76 per cent of the people interviewed spent their nights at home, listening to records, or the Rediffusion, chatting, playing mahjong, working at hobbies, sleeping, or just doing chores around the house.

Perhaps the fact of living in a closed environment has something to do with it – people housed in one unit in a block of high-rise flats look inwards, towards each other, rather than outwards.

Even Singapore Wonderland Amusement Park, that five-million dollar younger sister of the old-style Worlds is deserted on weekday nights.  Unlike the other amusement parks, which originated in the 1920s and 30s in a Singapore that was still young and waiting to be entertained.  Wonderland was opened in 1969. 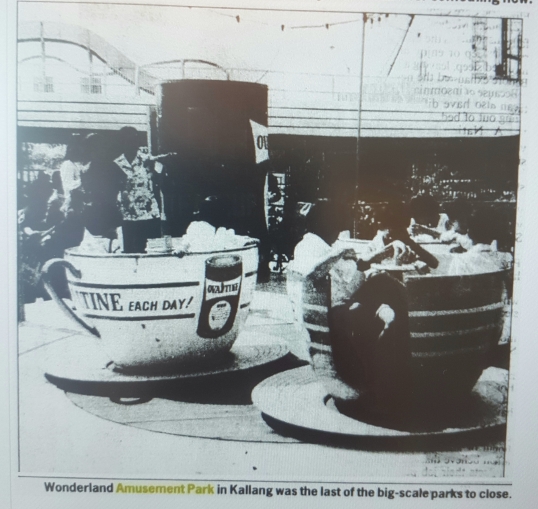 The machine operators there say that the park really come to life on weekends and when there are block bookings made by large companies for the entertainment of their employees’ families.  This happens quite frequently, apparently, and draws crowds as good as those during trade fairs.

But things are a far cry from what they were before, in the halcyon days of the smusement parks.  Yellowing newspaper clippings of the ’20s and ’30s testify to the bygone glory of the Worlds. 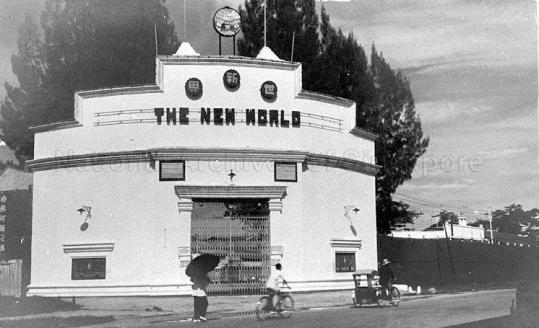 Clippings say Gay World (then known as Happy World）started a few shacks clustered together, and grew to be a venue for political rallies, badminton matches (in the days before the Singapore Badminton Hall was built) performing bands and cabaret acts.

One clipping dated May 7, 1937, described the World as “a parade ground for the rich and poor alike, where a towkay may entertain 20 friends in a million-dollar private apartment of the expensive restaurants to be followed by largesse in the shape of dance coupons in the cabarent, and where the humblest members of the working class may spend his very hard-earned 50 cents or more unostentatiously at the gaming booths, the open-air cinema or laneside hawker.”

And did you know that in the gala grand re-opening of Great World when the Shaws took over ownership in 1958, there were weeks of celebrations where champagne flowed?

Elizabeth Taylor and her then-husband, Mike Todd, even made personal appearances …

The Happy World, Singapore’s newest amusement park, complete with cabaret, cinemas, restaurants and boxing arena in addition to the usual side shows, open on May 6, 1937.  It is adjacent to the new Singapore Airport.  Pictures show the imposing buildings erected within the new park. 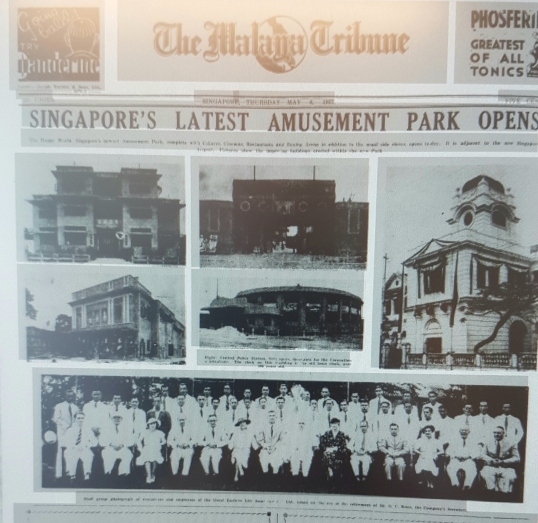 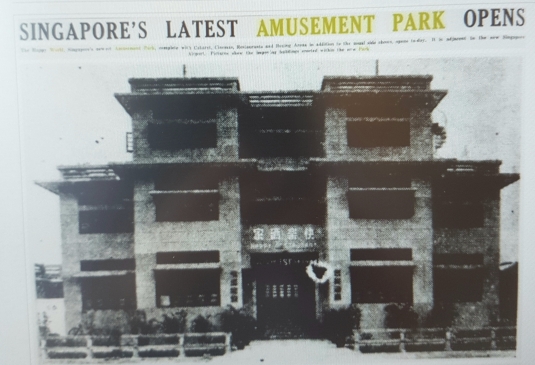 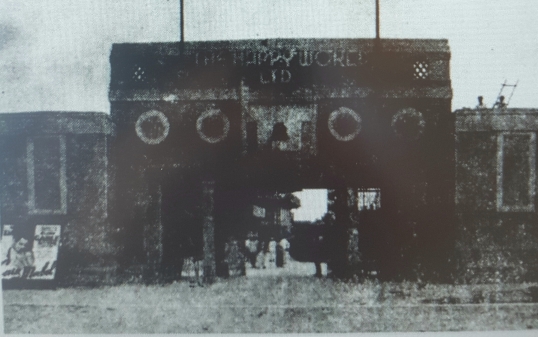 The juxtaposed photos of the Happy World from the Malaya Tribute (above) and National Archives of Singapore (below). 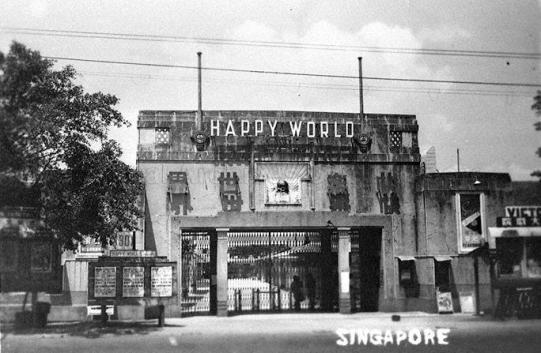 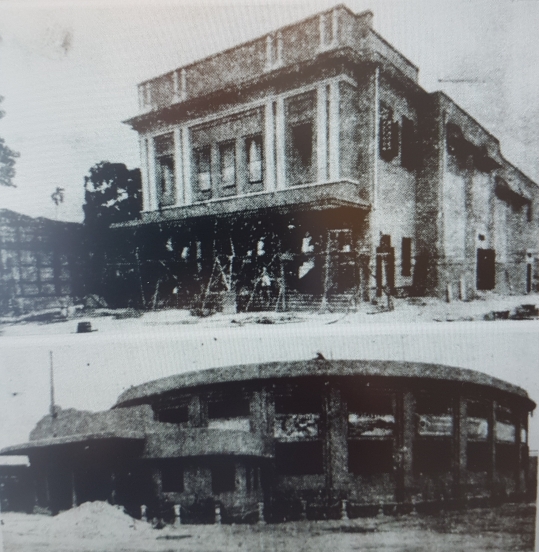 I am amazed to discover that these 82-year-old photos published in The Malaya Tribute on 6 May, 1937 are available to share on the blog, with thanks to NewspaperSG and National Library Board.

Before the pubs and the late-night supper places, Singaporeans went to Great World, or “Tua Seh Kai” in Hokkien after the sunset.  A favourite with locals and tourists, it offered the best of night entertainment in one place.

Spread out over 300,000 sq ft of land in an area bounded by Kim Seng, River Valley and Zion roads, the site was a Chinese cemetery before it was developed into an amusement park in the 1930s by Mr Lee Choon Yong, a businessman.

Back then, Great World was visited mainly by British servicemen and the upper classes.  However, business was poor and the park was sold to Shaw Organisation in 1941, before the Japanese Occupation.

After the war, Great World flourished as the new owners expanded and reopened it in 1958.

Among the attractions was the 27.4m Sky cinema, the tallest building in the park.  It was one of four cinemas there.

A $500,000 stadium, which has a revolving stage that hosted wrestling and boxing matches, was a hit with Singaporeans.  Locals and foreigners danced the night away at the Flamingo Nite Club, also known as Great World Cabaret.

Besides entertainment, Great World was also home to 150 stalls hawking food and merchandise, two popular Cantonese restaurants and a slew of amusement rides, such as Ghost Train and a ferris wheel.

In its heyday, the park attracted up to 50,000 people daily and was packed during festivals like Chinese New Year and Hari Raya.  The searchlight, which pierced the night sky whenever there was a special attraction, was a familiar sight.

My personal memories and experiences at Great World Amusement Park on the blog here and the video on YouTube here .

But the allure soon faded.  Television, supermarkets and neighbourhood night markets came up and drew Singaporeans away from the park.

Poor business forced it to shut down and Great World’s lights were permanently snuffed out on March 31, 1964.