Rochor used to be spelt Rochore -with an ‘e’.  Today, the ‘e’ has disappeared.

In The Straits Times of 19 February 2012, Toh Yong Chuan was in a bid to trace the missing ‘e’, a far more important ‘e’ issue surfaced: the elderly.

An excerpt on this article with courtesy of Newspaper.sg and The Straits Times to share on this nostalgia blog.

I was 10 years old when my family moved into a three-room HDB flat across the road from Rochor Centre in 1979.  Dr Toh Chin Chye was still the MP and Bugis Street was lined with street hawkers, not with the cutesy carts in the air-conditioned, dressed-up indoor street in Bugis Junction.

The disappearance of the Rochore constituency in 1988 did not erase it from Parliament records until 2000.  In March that year, there was a record of “Rochore Centre” being mentioned during the Budget debate.  That was the last trace of the old name.

A search among newspapers’ archives also drew blank on when the ‘e’ was dropped.  Also, old street directories or maps that could pinpoint the change of name were not readily available.

But as I got more preoccupied with finding the ‘e’, the more I found myself digging into my memories of Rochor.

Even until the mid-1980s, Rochor was dotted with shophouses that were prone to fire and open drains that overflowed during downpours.

There were three things that Rochor was known for – the transvestites brothels in Johore Road; the street hawkers in Bugis Street; and the bus terminal where SBS bus no. 170 and taxis ply between Singapore and Malaysia.

The bus terminal is still there; but most of the rest are gone.  The brothels have made way for a carpark, Bugis Street hawkers were cleared out in 1985 and the shophouses razed for Bugis Junction to be built.

And it was not just the sight, but also the smell.

My neighbourhood stinks, I used to tell my friends as I dissuaded them from visiting.  The daylong stench came from the nightsoil treatment centre opposite Rochor Centre.

Daily, the nightsoil truck with their distinctive 32 door panels would deposit buckets of human waste at the centre.  The smell got intolerable during hot afternoons.  The nightsoil trucks, also called honey wagons , made their last run in the mid-1980s, the centre closed, and Albert Complex with its OG department store stands at the site today.

The stench of the nightsoil in the day was matched by the odour of urine and vomit in the numerous backlanes and alleys at night.  I would hold my breath and cover my mouth when I had to take shortcuts through them.

The worst smell was the whiff of death, at least in my head, I would try to avoid a row of coffin shops and funeral parlours along Rochor Road, but yet find the occasional nerve to peep into the shops as I hurried past.

But not all the smells were unpleasant.  On my way to school, I would pass by a bread shop and a coffee powder shop next to it.  The aroma of freshly baked bread and coffee beans being roasted, when combined, is divine.

The smells – both pleasant and unpleasant – are also gone today, together with the shophouses and forgotten streets such as Noordin Lane that were wiped off the map.  The missing ‘e’ is not found in my memories of the old Rochor.

And as my frustration grew, I took a slow walk and found myself standing at the fourth-floor void deck at Rochor Centre.  There it was, right in front of me – Rochore Kongsi Home for the Aged – the first trace of the old “Rochore” name.  The ‘e’ has not vanished completely.

In a speech at the home’s opening in 1977, Dr Toh explained why he picked the void deck for the pilot project:  “The aged no longer need to feel that just because they are in the autumn of their lives, they will be put away in an institution, alienated from and forgotten by the rest of the world.”

The location of the former Rochor Centre on 5 May, 2019 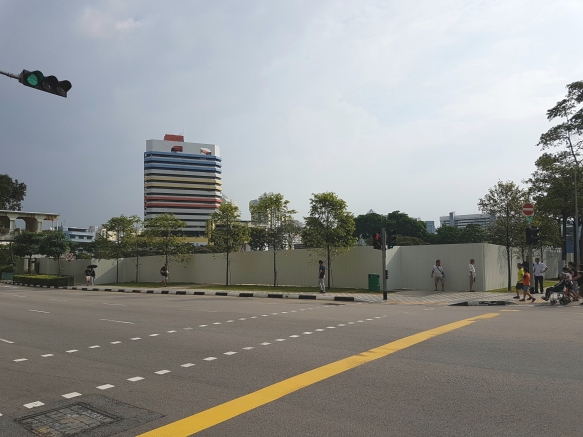 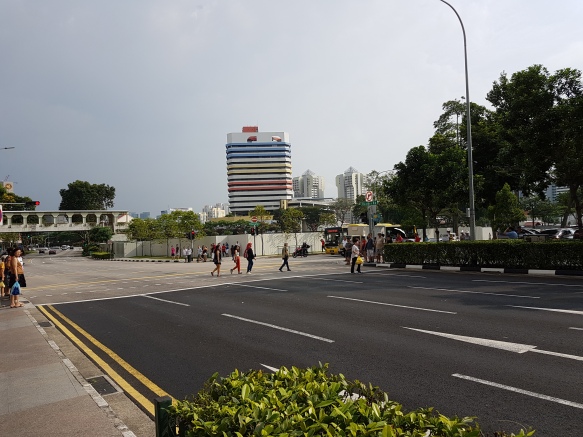 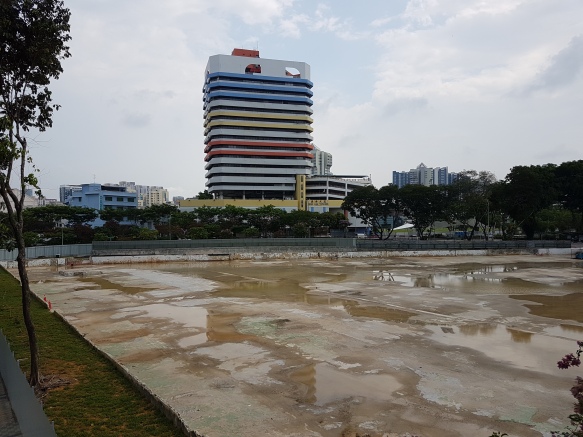 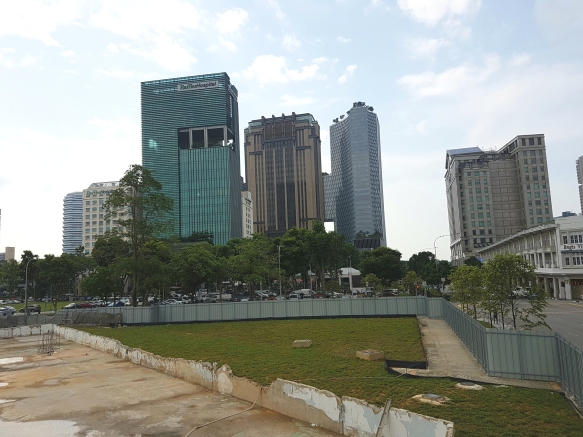 Rochor Centre before the demolition

The 4-colored blocks at Rochor Centre in red, green, blue and yellow before the demolition. 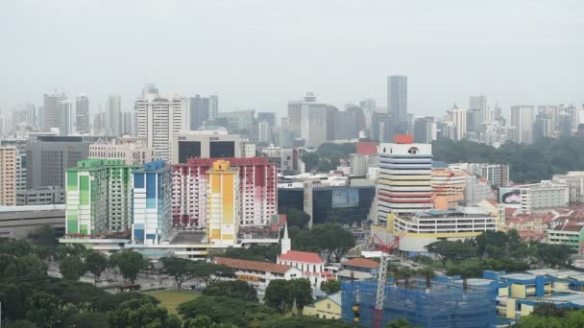 The colourful HDB flats was demolished to make way for a new expressway.

[This is a model of the $24 million complex for Rochore.

By the end of this year, the whole area, which has some of the oldest slums in Singapore, will be turned into a large modern residential, commercial and recreational complex.

The Rochore “face-lift” will include 572 flats and 212 shops in four multi-storey blocks on a 2.6 hectare site bounded by Rochore Canal Road, Queen Street and Rochore Road.

There will be 481 three-room flats and 91 four-room flats in the 14-storey complex with 480 parking lots in the basement.

The shops will be in a continuous three three-storey shopping podium of which each of the four blocks.  A playdeck on top of the podium will serve as a recreational area for residents.

Queen Street will have a new market with food stalls.  Hawkers will be resettled there.

The present bus station at Queen Street will be re-sited at Muar Road.  There will be six bus bays where commuters from Johore Baru and Bukit Timah area may alight.

Buses and taxis will travel from the new centre at Muar Road to Woodlands and Johore.

A new road will eventually replace the Rochore Canal Road and Ophir Road to streamline traffic at what is being described as the “gateway” to the city from Bukit Timah Road.] 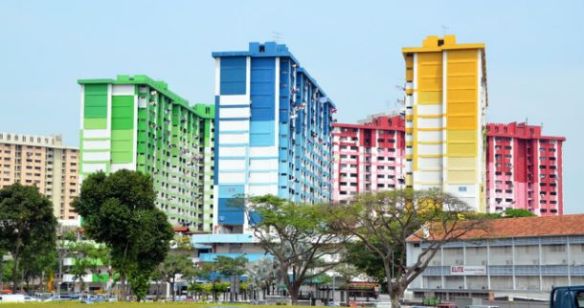