With thanks to MediaCorp Singapore for Documentaries On Five on “The Heritage Series” video featured on “The Last Farmers of Sembawang” here .

Watching this video inspired me to blog about the disappearance of kampongs and the farmers in Singapore which the younger generations to understand why these changes had happened in Singapore; the causes for the transformation of land use over the decades.

Alternatives for the resettled farmers

In 1976, Mr Lee Kuan Yew assured pig farmers in Punggol that the PAP Government would do all it could to help those settled elsewhere to re-adjust to their new environment.

At a rally in Tampines Way, the Prime Minister said it was inevitable that farmers would have to be settled in view of the development taking place in the area.

He said he understood that those affected would need some time to re-adjust, be he assured that the PAP candidate for Punggol, Mr Ng Kah Ting, would help them overcome their problems.

Of the farmers affected, he said the bona fide ones would be given alternative farmland elsewhere while the small farmers would be offered alternative employment at hawkers.

Mr Lee later spoke at another rally at Lorong Tai Seng in Paya Lebar where he told residents that the constituency would undergo phased development to make it as attractive to live in any other place in Singapore.

Speaking at a rally at Chong Pang Village, Mr Teong Eng Siong said that apart from the Sembawang shipbuilding yard, the government had allocated 1,174 hectares of land in the area for development into an industrial estate.

At another PAP rally, in Tampines Way in Punggol Estate, Mr Ng Kah Ting said:  “What the Workers’ Party wants to do is to set the clock back to the early 1950s when there was wide-spread unemployment labour exploitation and industrial unrest.  [Source:  Straits Times, 22 December, 1976]

Dr Goh Keng Swee’s policy statement on the future of pig farming in Singapore has pointed to a likelihood that we will have to import pork and poultry in large quantities.

Dr Goh, who has taken over the Primary Production Department, to the Parliament on 12 March, 1984 that “the future of Singapore pigs look to me to be very bleak”.

Though he had yet to touch on poultry farming, the general line of thinking on the long-term policy of primary products was made clear.  It was mainly the economics that would dictate the fate of the farming sectors here.

In other words, if the production costs of the food produced locally are higher, the Government prefers to get supplies from other countries.

However, the phasing out of the pig farms, if it happens at all, may disrupt the price mechanism of the pork supply here, according to an earlier study made by the PPD on pig farming.

In 1964, Minister for National Development Lim Kim San (sixth from right) during his week-long tour of rural districts and installations of the Primary Production Dept.

Field  trips for farmers organised by the Primary Production Dept.

This is an animal husbandry field station in a rural part of Singapore.  The Colonial Government of Singapore use these field stations to decentralize veterinary services to livestock farmers living at Changi, Ponggol-Tampines and Yio Chu Kang.  That about 80% of Singapore’s population is Chinese, is reflected in the fact that production is concentrated on pigs and poultry.  There are 750,000 pigs and 24 million birds in 1958.  Up-to date information and results of research on genetics and nutrition are disseminated to livestock farmers through these field stations. 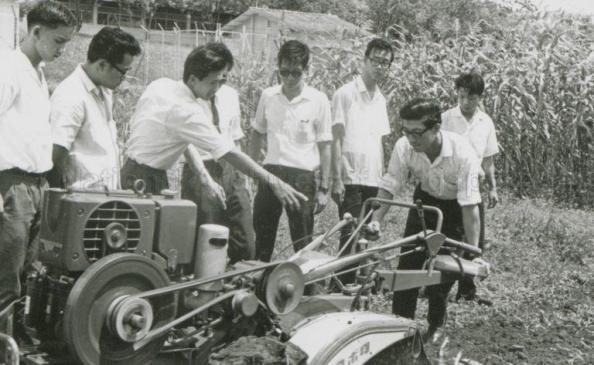 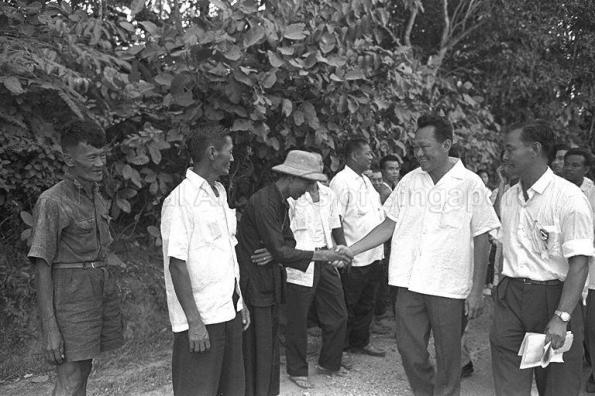 District for farmers to resettle

Over 2000 farmers were resettled in Ponggol, Tampines and Teban districts.

The 420 hectares of land were allocated by the government to resettle farmers from all over the island.  Most of the farmers were affected by resettlement were mainly in the Yio Chu Kang, Lim Chu Kang and Chua Chu Kang.

Meanwhile, over 300 land-owners in Ponggol, Tampines and Teban were served with quit notices by the government.

On the question of compensation for the farmers affected by resettlement, Mr Lai Fee Kwong, president of the Singapore Livestock Farmers’ Association said the government has not given any definite reply.

He said: “We understand that resettlement is necessary but financial aid and concessions for farmers to develop their farms on new lots must be given”.

Most of the small pig farmers in Punggol, Jalan Kayu and Lim Chu Kang have agreed to quit their farms – a dramatic switch in 1983 when they fought hard to keep them.

Seventy farmers in Punggol, who keep fewer than 1,000 pigs have indicated in the Housing and Development Board that they prefer to get compensation early and quit farming.

The decisions follow a policy statement by the First Deputy Prime Minister, Dr Goh Keng Swee, in Parliament that preliminary study had shown that it would be cheaper to import pork than to keep pollutive pig farming in land-scarce Singapore.

He added that the authorities were looking closer into the alternative sources of supply for pork.

Most of the small pig farmers have decided to call it a day because of the bleak future in pig farming here.

Another reason if the over-supply of pigs, which has made the prices go down.  Furthermore, diseases are not uncommon in the farms.  [Source:  New Nation, 13 January, 1975]

Please check out the related blogs “Ways Done in the Past – Rural Farming” here and “Memories of Woodlands – Jessica Bong” here .

The relevant photos on this blog to share with courtesy of the National Archives of Singapore.