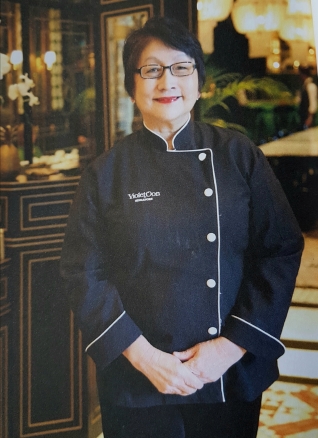 Violet Oon is considered by many to be one of the leading authorities on Asian cuisine, having written about food professionally early on in her career.

However, few people know that Violet is the Singapore Food Ambassador.

During her trip from April 30 to May 20, 1988, she was interviewed by the media and also give food demonstrations on television food programs.

She said: “I am really pleased that STPB is now using food as an introduction to Singapore.  To me, food is the more distinctive part of our culture”.

Born a Singapore Nyonya in 1949,Violet Oon is the grande dame of Singaporean cooking and is widely considered to be an authority on Asian cuisine, specialising in Nyonya food. Her reputation as a chef and food connoisseur spans the international arena and she often represents Singapore as a food ambassador abroad.

An Interview with Violet Oon by Anna Chittenden, author of the book “SINGAPORE, a unique, stylish and offbeat travel guide to Singapore.”

How did you get started on your food journey?

I first learnt the art and skills of Nyonya cuisine at the age of 16, when I took lessons from my aunts, my father’s sisters.  They were the ones that carried on the heritage of the cuisine from our ancestors.  In Singapore, my mother was liberated – she was a secretary and a career woman, and did not learn the nuance of this type of cooking.  In those days, you were not meant to be a superwoman, so if you were a secretary, you did not do the housework.

My first teachers were my aunt, Mrs Nona Bong and my great aunt by marriage, Mrs Nanny Khoo.  I also learnt in the traditional Asian way from Sifus (masters), who come from a long line of family chefs and cooks, and teach the next generation to carry the torch.  My first cooking classes were in Singapore in 1965-1966.  My aunts didn’t have proper recipes, but they were very accurate, because they were cooking everyday.  Recipes used to be written in five cents of this, three cents of that and one cent of this, so that makes no sense 30 years later!  So I asked my aunts to show me, and I would write as they cooked.  I then got very good at estimating the measurements, such as how many teaspoons and tablespoons went into the dishes.  When you actually watch people cooking, it is different from a recipe.

How did you become a chef?

Cooking and becoming a chef happened by chance.  I started off my career as a journalist in 1971, becoming the arts and music critic and features writer in the now defunct newspaper called the New Nation.

I then started writing about food in 1974 – my editor David Kraal said, “We had better have someone who can cook to write about food”.

During my career as a food journalist in the 1970s to the late 1990s, chefs would open their kitchens and invite me to cook with them.  I visited professional chefs in restaurants in Singapore (doing French, German, Italian, Chinese and Malay cuisine) and also abroad to places such as New Orleans, Paris, London, Australia and Hong Kong.  In this way, a lot of my cooking skills came by observation and osmosis.  The experiences that were of particular value to me though was when I was invited into kitchens in homes, where I would see each families’ own particular interpretation of well-loved dishes.

On the international food scene in the 1980s and 1990s there was a whole generation of highly respected women chefs who did not go through training in culinary schools, or who did not rise up the culinary ladder through working in hotel or restaurant kitchens, including Julia Child and Alice Waters from America, and Maggie Beer and Stephanie Alexander from Australia.  You could say I became a chef in the same way as these women did, by starting with a love and abiding interest and dedication to the art and craft of cooking a particular cuisine, and then sharing it with other people.

Peranakan culture is a marriage of the East and East with a strong dose of the West.  Starting with the native Malay culture in Malacca and Penang and finally in Singapore, where Chinese male immigrants married Malay maidens.

My culture, that of the Peranakans, evolved more than five centuries ago, with the flourishing of trade between China and the Malay Peninsula, although it started to die out from the 1970s.  It seemed as though there were very few of us, mainly concentrated in the Katong area of Singapore, which today is still the heartland of the Peranakan culture.  Having been born in Singapore and brought up for much of my childhood in Malacca, I was very much in touch with the essence of Peranakan life, with their specific art, music, food and dress.  In the 1950s living in Malacca, I saw a world from a past age.  For example, there were multi-generational families living in mini-apartments in courtyard house, family dinners where the men ate first and wives and daughters last, and women who dressed in opulent, richly embroidered kebayas over hand-painted sarong skirts from Pekalongan in Indonesia.  Yet coming from a modern Peranakan family, we were more in tune with the 20th century than of the past, and I did not quite live the life of a Peranakan.  At home, we did not speak Peranakan patois, ate both Chinese Hokkien home cooking as well as Peranakan dishes and Western food.  My mother did not dress the way Peranakan women did in their sarong kebayas, choosing instead to wear modern dress and the Chinese cheongsam.

Peranakan food is very strongly Malay based with the addition of Chinese Hokkien dishes.  The Chinese originators of the culture came from the Fujian Province in China, and so the Chinese part of cuisine is Hokkien – a lot of dark soya sauces, taucheo, garlic and shallots.  Indians, who came from Southern India, brought with them their curries and rich aromatic seed spices which added to the cuisine, as well as a strong touch of British cooking which you’ll see in the cakes and morning breakfasts.

What are your favourite Nyonya dishes?

Do you have a favourite ingredient?

The combination made in heaven is the marriage of coconut milk and gula Melaka (palm sugar).  For savoury flavours, essential ingredients include galangal, turmeric, lemongrass, shallots, chillies and belacan.

Where do you go for inspiration?

I’m inspired by home cooking.  My whole childhood was spent going to my aunts’ and different people’s homes.  What you eat at home with your family is a reflection of your life and your family’s life, your travels, and where you have been.  For example, Anglo-Indians have a unique food, which is neither Indian, nor English.

I’m fascinated by dishes or recipes that are locked in time.  The food, as well as drinks that would have gone with it, represents a certain time and place.  I was born in 1949, so in my restaurant there are these different layers of time.  These dishes are like archaeological records.  The restaurant is the brainchild of my two children, but for them, it’s also about capturing and remembering the family cooking.

How important do you think food is to the Singaporean culture and identity?

It’s very important, more so in the last few years, as people start to question what is dying off, such as the hawker culture.  It’s so essential to our psyche, more so than people realise, because expenditure on food here is much higher than in other cultures.  A lot of disposable income goes into food.  Food seems to be the tie that binds us culturally and emotionally as a people, much more so than a shared history of art or music or dance or literature.

What other chefs in Singapore do you admire?

I like what Willin Low, chef of Wild Rocket does.  In the end, it doesn’t matter what cuisine you do, the test is whether it tastes good.  He has taken a lot of traditional flavours from his culture (Singaporean), which is different from mine, and reworked it.  It’s all very delicious, and not only delicious but cooked properly technically.

But I’m more concerned with eating local hawker food that is very old, and sooner or later, the people running the hawker stalls are going to retire and nobody’s going to be able to eat their food.  It’s scary.

Which restaurants do you most enjoy eating at on your day off?

For nostalgia and old-fashioned authentic tastes, I love the Ngoh Hiang at China Street Fritters in Maxwell Food Centre.   They are the last in the whole of Singapore for what they do.  The food wouldn’t even taste the same as if you tried it in China, as they came over 70 years ago, so their cooking style has evolved.  I want to be able to savour flavours and textures that may die off within the next generation.  Already, many old-school hawkers have closed their shutters due to the extreme hard work it takes to cook authentic, old-fashioned food as well as the high cost of employing kitchen helpers.

I love the pau at Teck Kee Tanglin Pau and at Tiong Bahru Pau.  To me that’s the real Singapore texture.  The Singapore pau pastry and the Hong Kong style pau pastry are very different, for instance, when you to the tim sum restaurants in Hong Kong, there’s a very fluffy texture.  I want to see places like Teck Kee preserved.   It’s interesting because it’s truly Singaporean.  This type of food originally came from China, but now they use a particular recipe and a particular style that doesn’t exist in Hong Kong.  Those are the things that I want to see and I want people to know, not whether somebody cooks very well, but whether these nuances are kept.  At Tiong Bahru Pau, that’s the actual Singapore texture and dough preserved.  It’s very important.

I would like to see the children of the old hawkers take over.  They grew up watching their fathers cooking these dishes for 20 years, so there’s a certain osmosis and DNA which is so difficult to capture.  You can’t teach it.  There are things that they know, that they don’t even realise that they know.  You may be able to cook the food excellently as a new chef, but there are certain touches, which you would only have if you grew up with it.

What do you love most about Singapore?

I love our inclusiveness, and our unique Singlish multi-cultural sense of humour; our classic put-downs that speak a volume in a word or two.  I love our whole natural environment.  Our urban jungle is literally a jungle with lots of plants, tree and foliage.  I love our built and unbuilt environment.

Singapore has much more character than people think.  What I find very funny is that a lot of westerners coming to the Far East think that exotic means dirty.  If it’s dirty, then it’s exotic.  They can’t believe that it can be clean and have character.  You just have to go to any of the HDB areas and just hangout.

What are you most proud of as a Singaporean?

I think what make me most proud is our inclusiveness, which is now the more obvious in the midst of non-inclusiveness in many societies.  A mosque will be next to a temple, which is next to a church.  To us, religious tolerance and racial harmony is so important, for example, in the schools, children celebrate a racial harmony day.  Regarding our respect for each other’s religion, customs and sense of private cultural space, although we may not be the best at this in the world, we can be proud of what we are and where we are.

[Source:  An Interview with Violet Oon by Anna Chittenden in her book, SINGAPORE. 1st Edition of LOST GUIDES].