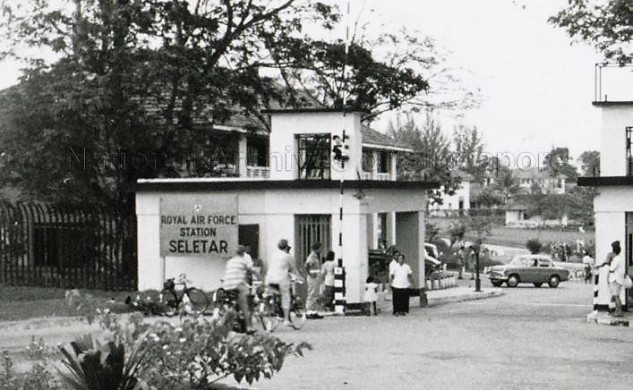 The entrance of the Royal Air Force Seletar, Singapore  c 1950.  Courtesy of Derek Lehrle who contributed the photo to the National Archives of Singapore (NAS).

The entrance of the Royal Air Force Seletar, Singapore  2012.  Courtesy of Frank Yap.

The entrance of the Royal Air Force Seletar, Singapore.  Photo taken by James Seah on  8 August, 2017.

The juxtaposed photos of the entrance of the RAF Seletar in Singapore are posted on this blog to show the same place, different times, different memories for many of us.

Piccadilly Circus is a road junction and public space of London’s West End in the City of Westminster, built in 1819 to connect Regent Street with Piccadilly. In this context, a circus, from the Latin word meaning “circle”, is a round open space at a street junction.

Another Piccadilly Circus is found at Seletar in Singapore.

As a former British colony, Singapore is full of British road names – for instance, those based on places such as Lambeth Walk , Maida Vale, Edgeware Road, Mornington Cres, etc. 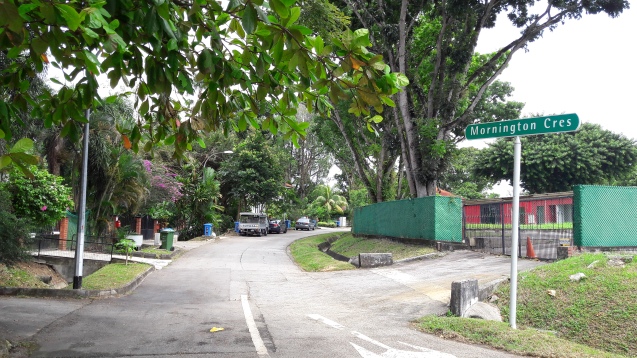 The majority of Singapore’s roads and places were named during the colonial period, but there was no move to remove these names after 1965, unlike other post-colonial cities that have been only too eager to erase such signs of their colonised past.

Behind every road name is a story of Singapore.

Indeed, so little of the past has been preserved that it can be hard to keep in mind Singapore’s rich history.  What has survived, though, is a tapestry of road and place names going back decades and even centuries, which serve to anchor the past in our ever-changing landscape.

In particular, many road names point to individuals and communities who helped shape Singapore, and whose stories are quietly embedded in our surroundings, awaiting our discovery.  The Piccadilly Circus at Seletar is in existence in Singapore for over a century. 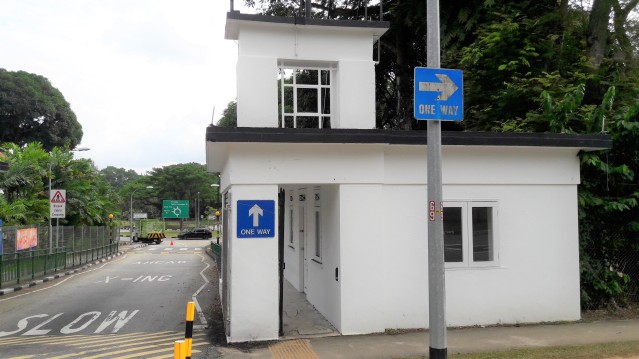 This shabby building (photo above) was once a part of Seletar Camp. Now, its paint is peeling and the signboards are rusting away. Seletar was one of three Royal Air Force (RAF) bases here before the British pullout in 1971.

The juxtaposed photos (above & below) of the same building beside the side entrance into the RAF Seletar airbase.

The front (above) & back (below) of the same heritage building.

Since 2002, the camp’s entrance has been moved deeper into the complex, and the old main gate, guardhouse and several buildings have been abandoned since. A group of former airmen from the RAF and the Republic of Singapore Air Force want the entrance preserved as a historical site. 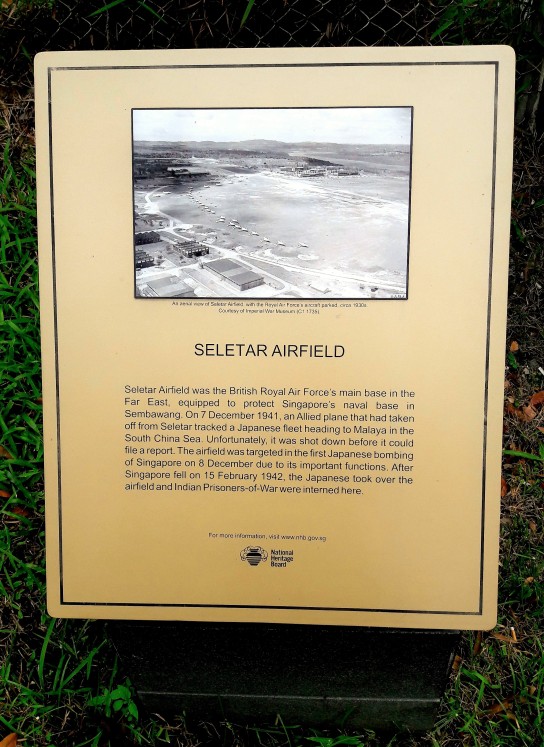 Within the compound, not much has changed either. Houses there have retained their black and white exteriors, and roads still bear names like Regent Street, Oxford Street and Sussex Garden. There’s even a Piccadilly Circus. 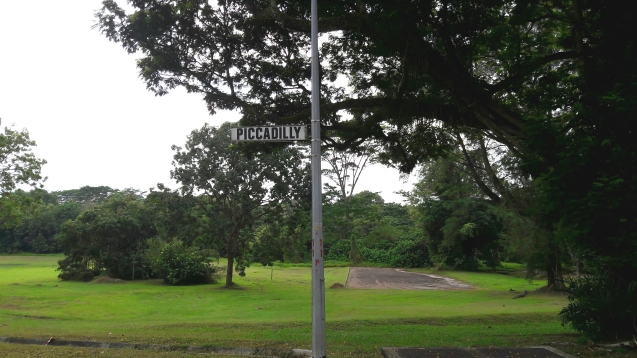 In an interview with The Straits Times on 21 February, 2014,retiree Ho Bak Hai, 76, paints an idyllic picture of life in Seletar – he spends some afternoons playing football with his grandson in their garden.In the evenings, he takes a quiet, solitary stroll around the estate.

He sees colourful birds circling the area’s undulating terrain and well-manicured green fields. Butterflies, dragonflies, frogs and even the occasional snake visit his Maida Vale home. “The fresh air is good for the soul. It’s a quiet respite and a nice place to retire with the company of your family.”

His neighbour, Dutch national Edith Kraaijeveld, 45, a Seletar resident of nearly two decades, feels its beauty and heritage should be shared with the rest of Singapore. An interactive gallery showcasing the area’s heritage, with artefacts such as vintage cars, will be one way to engage families.

Architectural historian Lai Chee Kien hopes the history and culture of the area’s original occupants – the Orang Seletar or sea nomads – can be showcased.

The area has special significance in Singapore’s history – it’s changing occupants reflecting the changes in the region and the Singapore’s rise and fall. From the early 1800s until the 1950s, “the riverine landscape was home to the Orang Seletar and their boats”, says Dr Lai. Immigrants from China and India who settled there grew pepper, gambier and rubber.

The colonial government set up a camp – the largest British RAF base in the Far East then. It became operational in 1928. To ease servicemen’s homesickness, roads and roundabouts were named after places in London, such as Piccadilly Circus, Hyde Park Gate and Baker Street. There still stand today.

The camp fell into the hands of the Japanese navy during World War II. In the late 1960s, after the British withdrawal, the Singapore Armed Forces took over the eastern part of the camp and its residential and commercial parts were made public.

Ms Kraaijeveld says: “Seletar is a really special place with a rich history longing to be told. 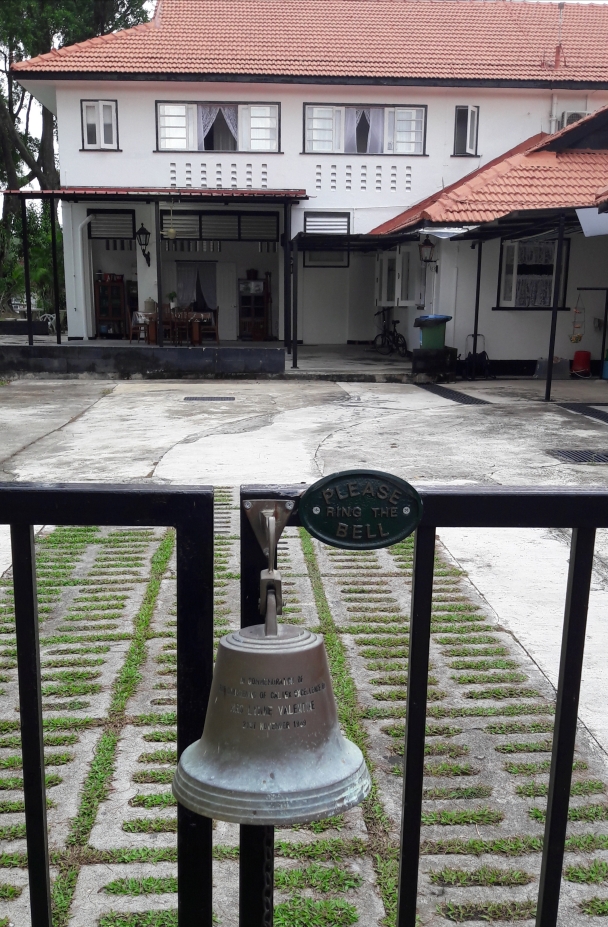 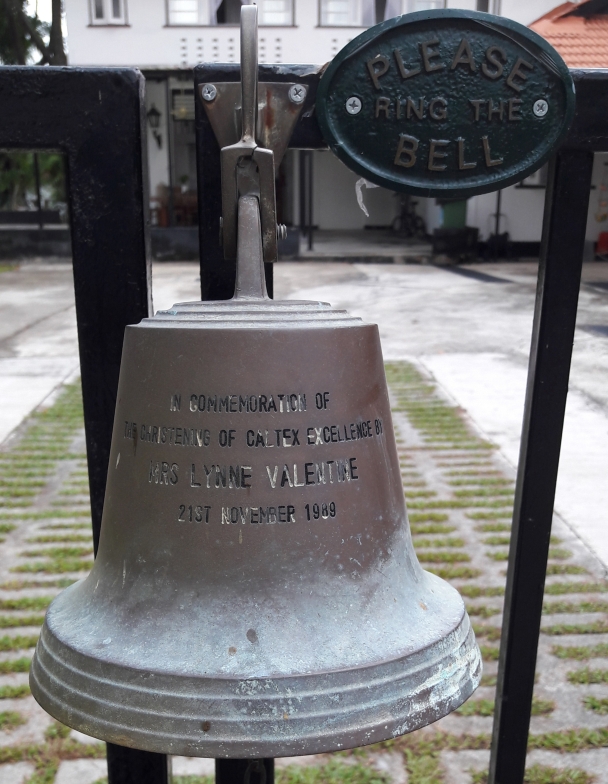 Block 179: The RAF’s station headquarters, along Seletar Aerospace Drive, is one of the oldest buildings in the area. It
was the target of air raids and suffered extensive dame in World War II.

Block 450: This was desigwas one of several large barracks in the area. Lke nearby Block 179, it was designed in the tropical Art Deco style.

“The Silver Hanger” fly past marking the 13th anniversary of the Battle of Britain on 11 September, 1953.  (Archived photos with courtesy of the National Archives of Singapore).

With thanks to Simon Hawketts who created this special site, a bit different from a lot of photo sharing sites because the pictures are not attributed to any particular photographer but are pictures which were taken by lots of unknown photographers, using unknown cameras and in unknown locations. These are pictures found on rolls of film in second hand cameras that I’ve bought, or in boxes of colour slides which I’ve picked up on auction sites and car boot sales.

Although it is common these days, in the age of social media, to share a lot of pictures, years ago pictures were only shared amongst family and friends. It’s interesting to think that over the last 100 years there must have been millions of pictures taken which have only ever been seen by a handful of people or by no one at all. Many have been destroyed, many are sitting in people’s attics and cupboards forgotten about and many partially exposed rolls of film are still sitting in a lonely camera somewhere waiting to be discovered. The aim of this site is to release those pictures and allow people to view them.

This blog is inspired by Simon’s archived photo of the RAF Seletar airbase entrance and led me to research the relevant sources to share with our friends at the RAF Seletar Singapore, RAF Seletar & Tengah, Ex Far East Brit Brats groups on Facebook. I hope to bring them fond nostalgic memories of their days in Singapore and their RAF services at Seletar.

Please watch the video of the old photos developed from the “found films” here .

The archived photo of the Seletar Swimming Pool in 1950s, courtesy of NAS.