Many of the younger generations of Singaporeans have not been born.

On the eve of Singapore’s first National Day, then Prime Minister Lee Kuan Yew addressed the nation at a National Day Rally.  After reviewing Singapore’s progress over the past year, Mr Lee expressed confidence that the year ahead would become easier, “as the shape of things is becoming clearer to everyone”.

In his speech, he outlined the core competencies that Singaporeans had to develop to progress.

Between 1966 and 1970, the Prime Minister’s National Day Address was held before 9 August.  In 1970, the rally was moved to the first or second Sunday after National Day.

Please watch the video of the founding Prime Minister Lee Kuan Yew’s speech in fluent Hokkien to reach out to the Hokkien audience at the rally.  The 50-year-old video with the courtesy of the National Archives of Singapore to share on this blog here .

The archived photos on the blog with credit to the National Archives of Singapore.

Prime Minister Lee Kuan Yew being greeted by Minister for Culture and Social Affairs Othman Wok upon arrival at the National Theatre to attend the National Day eve rally and cultural show on 8 August, 1966.  On the left is Mrs Lee Kuan Yew. 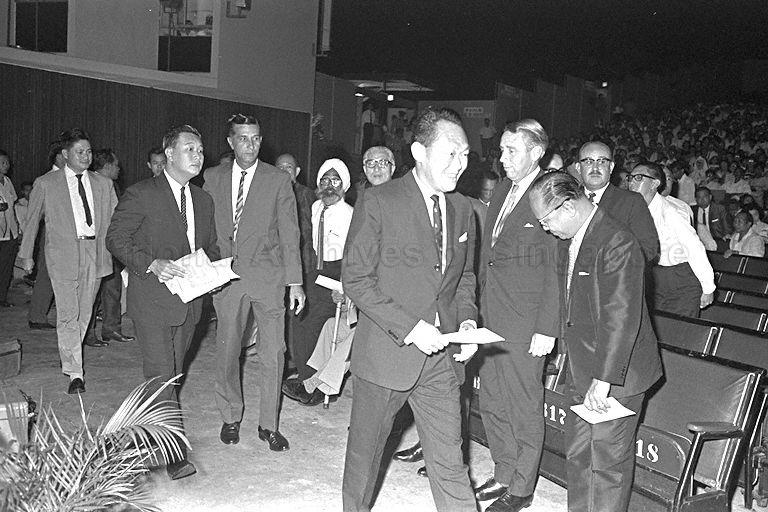 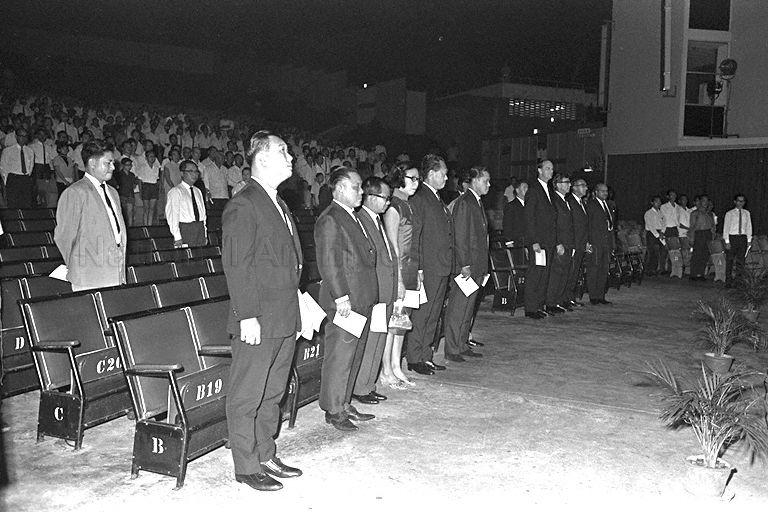 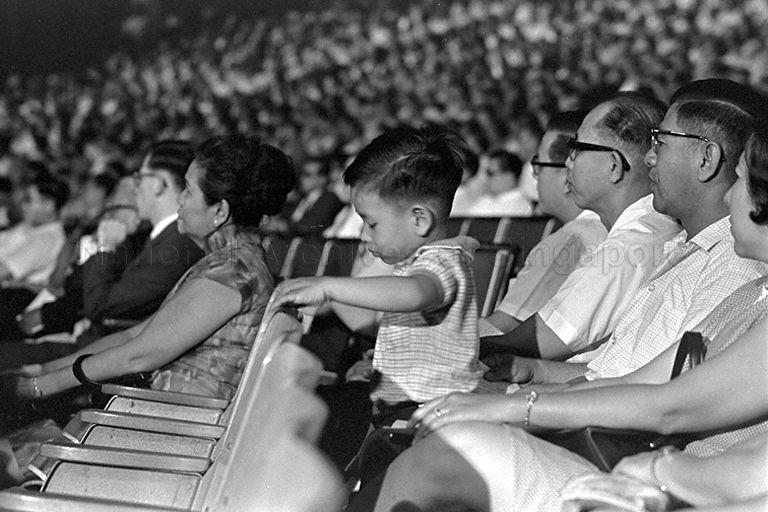 This time last year, my colleagues and I had already made a fateful decision on your and our behalf.  In the nature of the circumstances, there was no time for consultations.  We could not find out what the consensus would have been had we refused to acquiesce and had we insisted on going on with the kind of Malaysia which we envisaged it was, at the time when we agreed to join.  It is useful this evening not so much to go back to the past – the whys and the wherefores – to apportion blame but more to search deep into our hearts to ask if the things we set out to do were right or wrong; were good or bad.  And I say that we have no regrets.  We are completely unrepentant that we set out to build a multi-racial and, for some time, a multi-lingual, multi-cultural community, to give a satisfying life to the many different kinds of people who foregathered here in over 150 years of the British Raj.

And we, in the end, on balance decided to carry on with our multi-racial experiment – if you like to call it – just in Singapore alone rather than be forced into large-scale conflict in Malaysia.  Nothing has altered, not the basic data nor our basic thinking.  What has altered are the circumstances in which we now find ourselves.  I think it is reassuring on an anniversary to weigh the odds to see how we have performed, the promises against the performances.  And my experiences of Singapore and her young, active, energetic if somewhat exuberant people is that given honest and effective leadership, an honest administration within which to bring forth themselves, they will make the grade.

It has been a year of great and sudden change.  Very few countries in the world go through the kind of climacteric we have gone through.  From 1961 to 1963, we fought for merget, to sink ourselves in the identity of a bigger whole.  Between 1963 and 1965, we found ourselves gradually embroiled in something which we half suspected but never quite admitted was possible within such a multi-racial situation.  And in 1965, with decisive suddenness, we found ourselves asunder.  All the while, despite all the political unpleasantness that followed, we were making progress.

Imports went up and so did exports.  These are facts and figures, not fictions of the imagination of my colleague, the Minister for Finance.  They have checked against every indent that goes in and out of the Port of Singapore Authority.  They have checked against our revenue on the same rates of taxation; the number of factories, the people they employ, the goods they produce, their value; the housing being built.

And they tell a story which we have very little to be ashamed of.  Almost in spite of ourselves, we have forged ahead; revenue has gone up 10 per cent; the economy is surging forward.

I am not saying that this will be so far all the time with no effort on our part.  But we will progress so long as we reward initiative and resourcefulness; and as long as whenever we face peril, courage and resolve are never found wanting.  But more than just making material progress, like other groups of human beings whenever they are found in the world, we seek permanent salvation, security to time immemorial, to eternity.  We believed – and we still believe – that that salvation lies in an integrated society.  I use the word advisedly – “integrated” as against “assimilated”.  I would not imagine for one moment a Singapore Government trying to assimilate everybody.  You know, 75 percent Chinese trying to convert 10 percent Tamils and Hindus and Tamil Muslims and Northern Indian Muslims into good ‘Chinamen’ – or not even good old Chinamen: good old ‘Overseas Chinese’, Singapore brand, Singapore type.

I would not try it; it is not worth the effort.  Nor would I try it with the other groups. Certainly, not my colleague like Inche Othman who has been here for many, many generations; or even my colleague like Tuan Haji Ya’acob from Kelantan where he was born.  Why should we try the impossible?  But I say integration is possible – not to make us one grey mass against our will, against our feelings, against our inclinations, but to integrate us with common values, common attitudes, a common outlook, certainly a common language and eventually, a common culture.

It is most important that we should understand what is it we are after in the long run.  And, if we are after a permanent and secure future for ourselves, then this must be done: to build a society which, as it progresses, improves, flourishes and gives an equally satisfying life to one and all.  If groups are left behind either on the basis of language, race, religion or culture, and if with groups, the line of division coincides with the line of race, then we will not succeed in our long-term objective of a secure future.

For so many other countries in this part of the world are faced with the multi-racial societies that gradually formed themselves over the period of colonial rule.  Broadly speaking, there are two ways in which we in Singapore can set the pace.  First, prove that the migrant element is dynamic, is trustful, is industrious and can get on – of that, I have no doubt – but that in the progress of getting on it is unmindful of its wider responsibilities and its long-term interests, leaving in it strain a whole trail of frustrations and bitterness which must have its repercussions throughout the whole region as men’s minds begin to ponder on the unpleasant consequences of what we have done or what we have manifested.  The other way is to demonstrate that we are a forward-looking, not a backward-looking society, not looking to the past for examples of patterns of behaviour and conduct completely irrelevant in the modern society that we now find ourselves …

Man reaching out for the moon and the stars …..  It is to show we do not find our solutions by turning over the dusty pages of some chronicle of some ancient time telling us about some incident customs more relevant to his days, but that we have the forward, the inquiring outlook, and are keen to learn, keen to make a success of the future.  If we can give everyone – regardless of race, language, culture – an equally satisfying life, then surely that must be a benevolent or beneficial influence on the whole region as other people turn their eyes toward us and say, “It is not true … given the right political attitudes and the aptitudes and the framework of a good, effective administration, all can thrive and prosper.  “It is in the nature of things that we must talk in parables.  And the older I become, the more I am convinced that sometimes perhaps, the Prophets spoke in parables because they had also to take into account so many factors prevailing in their time.  But, I would like to believe that we are a people sufficiently sophisticated to understand parables and the value of ever-searching for new solutions, new ways to achieve old target.  Never be depressed, never be deflacted by setbacks.  We suffered setbacks.  In 1964, there were two communal riots.  And we do not pretend to ourselves they were not communal riots – they were.  We face facts.  And this is one of the greatest strengths about Singapore: its willingness to face reality including the 9th of August.  We used to celebrate 3rd of June;  then, it was 16th of September, when we promulgated Malaysia.  Then, it went back to the 31st of August because other people celebrated the 31st of August.  And then it had to be the 9th of August, and the 9th of August it is , not because we wished it to be but because it was.  This capacity to face up to situations, however intractable, however unpleasant, is one of the great qualities for survival.  A people able to look facts squarely in the face, able to calculate the odds, to weigh the chances and then decide to go it, are a people not likely to go under.  And when this time last year, before the news was broken to the world, my colleagues and I carried that heavy burden in our hearts of having made the decision on your behalf, we consoled ourselves with this thought: that whilst thereafter, the multi-racial society that we had set out to create could be implemented only within the confines of Singapore, we knew deep down that ultimately, its impact must spread far beyond its shores.

No geographic or political boundary can contain the implications of what we set out to do when we succeed.  And, there is no reason why given patience, tolerance, perseverance, we should not, in this hub, in this confluence of three indeed, four great civilisations, create a situation which will act as a yeast, a ferment for what is possible, given good will, forbearance and good faith.  Every year, on this 9th August for many years ahead – how many, I do not know – we will dedicate ourselves anew to consolidate ourselves to survive; and, most important of all, to find an enduring future for what we have built and what our forbears will build up.

A yearly event since 1966, the Prime Minister uses this rally to address the nation on its key challenges and its future directions, and can be compared to the State of the Union Address delivered by the President of the United States.

The rally originated as a private meeting.  Prime Minister Lee Kuan Yew delivered the first National Day Rally speech on 8 August, 1966, to a select group of community leaders.  The speech was released to the media only two weeks later.

In 1971, Mr Lee decided at the last minute to have it televised live to the nation.  Explaining his decision, he said then: “We cannot go on doing the things we are doing unless not only you but a lot of other people outside know the raison d’etre, the background, the reasons, the problems …”

Since then, the rally has become a fixture on the political calendar, held always on the first or second Sunday after National Day on August 9.

The speeches are usually delivered in Malay, Mandarin and English, and up till 1980, the late Mr Lee Kuan Yew also spoke in Hokkien.

When Mr Goh Chok Tong took over as Prime Minister, he said he had big shoes to fill, but walk his own way in his maiden speech in 1991.

Prime Minister Lee Hsien Loong, who gave his first National Day Rally speech in 2004, now uses graphics, photos and videos in a multimedia presentation that is not only broadcast live, but also streamed online, tweeted, and posted on Facebook.