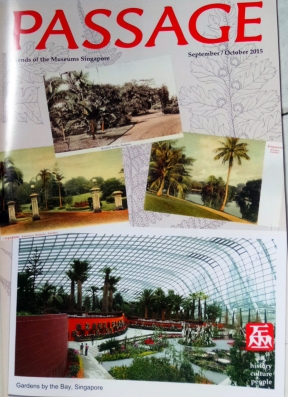 The above cover photo of “PASSAGE” September/October 2015, a publication of the Friends of Museums Singapore.

With thanks to the National Museum of Singapore, an article of “The Bukit Ho Swee Fire” by James Seah was featured in this issue of the magazine is reproduced on this blog to share. 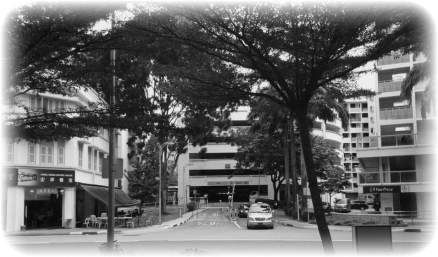 Before the Bukit Ho Swee Fire on 25 May 1961, I lived in a zinc-roofed hut.  It had a kitchen near the front door and opened onto a single bedroom.  My mother, two sisters in their early 20s and I slept in a big bedroom.  My father slept in the kitchen, on a foldable canvas bed.  I was about 11 years old.  The community toilet and bathroom, about 200 metres away, were shared by about six tenants.  Water came from a shared standpipe and was collected in pails and taken into the house.

In the evenings, I played hide-and-seek with my neighbourhood friends in the landlord’s compound, near the ancestral tomb behind his house.  At weekends, my friends and I would play games at the Delta Community Centre in Zion Road.  We had a single lightbulb of just 40 watts, so our hut was dim and oil lamps were used in the evening if I needed to do my schoolwork.  My family used to go to bed at about 9 o’clock and the kampong was quiet at night.

On the fateful day of 25 May 1961, my family was made homeless.  Along with our neighbours, we had to sleep in a Seng Poh Primary School classroom for about a week.

Many of today’s youngsters, including my own children, have only read about the Bukit Ho Swee fire in their history textbooks.  But the Bukit Ho Swee residents who are still living will vividly remember the tragic events of the Great Singapore Fire of over 50 years ago.  It was a Hari Raya Haji and a school holiday.  I was in Primary 6 at Delta Primary School and that morning, had gone with my mother to my second auntie’s house in Chin Swee Road.  As my mother and I were heading home to Beo Lane at about 3:30 pm, there was pandemonium at the junction of Havelock Road, beside the wet market.  Dark billowing smoke filled the sky; the smell was toxic.  People were screaming and shouting “Fire! Fire!  This scenario was the first I had seen in my life; I had never before seen, read about, or watched such an event at the movies (monochrome TV broadcasts in Singapore only began in April 1963).  This was a huge fire that was burning down houses and buildings and was one that I witnessed with my own eyes.  However, it was excitement rather than fear of danger that I felt. 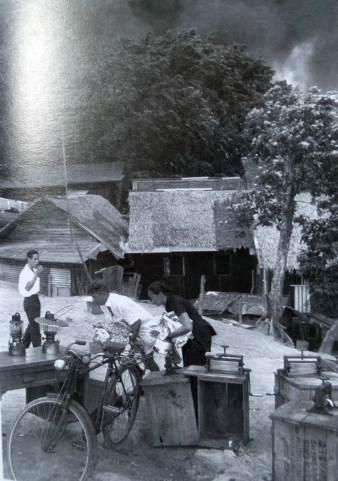 Saving belongings and running from the fire

During the fire, many people were carrying bulky items such as cupboards, tables, chairs, and pots and pans instead of saving the lives of people and domestic animals.  But there were some compassionate people who carried to safety the chickens, goats and pigs they had reared, and also their beloved pets.  However, there were a few unscrupulous people who looted the personal belongings of those who fell victim to the fire.

On reaching home, my mother had the presence of mind to start packing important items without wasting time.  She was calm and did not panic, having been through the tough experience of the Japanese Occupation when she was young.  She slung a sarong bundle over her shoulder and quickly dragged me out of the house.  I later learned that some jewellery and most importantly, our birth certificates and other family documents had already been packed in preparation for an emergency.

While my mother had been rushing around salvaging these lightweight personal items, I took only my school bag with all the textbooks and stationery I needed for school.  I was dazed and did not realise that this was the last time I would see the home we were escaping from and didn’t fully understand the consequences of a fire such as this.  I had changed into slippers from the pair of shoes which I had earlier worn to my second auntie’s house because I thought that I would be returning to the house later.

My mother and I ran as fast as we could as we fled from the burning houses.  In fact, there was a stampede.  The older and weaker people were carried by younger and stronger ones.  I noticed my neighbour’s daughter knelt down to pray, staring at the darkened smoke-filled sky.

Once we had reached Havelock Road, we walked towards Delta Circus for safety.  My mother could run well and I followed her.  She asked me which way we should go; for a moment, she was at a lopss.  A car stopped in front of us at Prince Philip Avenue and its driver turned out to be the daughter of a relative of my mother’s.  She told us that she had heard about the fire at Bukit Ho Swee.  She was a Good Samaritan who wanted to help whoever she happened to know and also strangers.  What a fortunate coincidence that my mother and I ran into this kind lady; she was a saviour indeed.

We were driven to the Kim Seng School opposite the Great World Amusement Park.  The lady had been informed that centralised firm victim camps were being set up at several schools along Kim Seng and River Valley Roads.  The school compound was crowded with thousands of survivors, police, military personnel, members of the Red Cross and the St John Ambulance Brigade, doctors, nurses, volunteers and helpers.  Tents had been erected for the registration of the survivors and victims, cooking utensils were provided to those who wanted to cook on the spot and supplies of biscuits, hot and cold beverages, blankets and clothing were made available through the generosity of sponsors and donors.  There was also milk powder for babies.  Every victim was issued an aluminium mug, tiffin holder, spoon and fork (similar to those later provided to recruits during my National Service days).  There was a long queue for the school’s toilets and bathrooms at all hours of the day and night.

My mother and I settled into the corner of a classroom that held more than 30 other families.  Announcements in the four official languages and in dialects were continually being made over loudspeakers; these were paging for the friends and families of the survivors in an effort to locate those lost and missing.

My father rushed to the school camp from his shop in Chinatown and later my sisters found our personal particulars in the registration record.  We breathed a sigh of relief, happy to be reunited that evening at the school.  Dinner and supper (both halal and non-halal food) were supplied that night to the fire’s survivors.

I remember sitting on the floor of the classroom after dinner to do my homework and also sleeping on the floor that night.  Throughout the night, some innocent young children ran around playing games in the school compound, which was floodlit with lamps.  As a young boy of eleven, I neither knew nor understood the extent of the fire disaster that left so many people homeless.  The worries about where to find another home after the fire and about our future, were left to the adults in the family.  It was surreal.

This article was submitted to the Singapore Memory Project (SMP) and selected by the Prime Minister’s Office here .

Memories of Kampong Bukit Ho Swee, also by James Seah about his childhood, was published in the July/August 2015 issue of PASSAGE magazine. 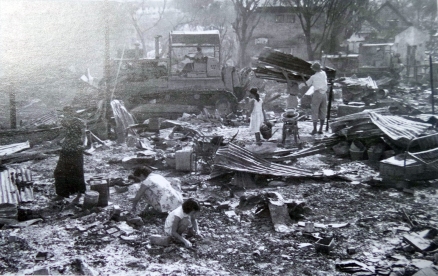 Photos on this page, courtesy of the National Archives, Singapore.