The blog topic of the present to the past strikes my intuitive thought moments which my young friend said:  “It is not as clear cut as what is past is past and what is present is present … but we see a trickle of the past in the present”.  Deep and profound indeed …

Next, I was inspired by the Cavenagh Bridge of Singapore which is one of the oldest bridges built in Singapore, over a century ago.

It was built in 1868 and is today the oldest bridge across the Singapore River.

It was the last major work of the Indian convicts based in Singapore. Now it serves as a foot-bridge for pedestrian traffic only.

In July 1856, there was a mere wooden foot-bridge where the Cavenagh Bridge now stands.

In 1868, Cavenagh Bridge was built to commemorate the 50th Anniversary of the founding of the Crown Colony of the Straits Settlements held in 1869.

It is named after Colonel Cavenagh, the last Governor of the Straits Settlements (1859 – 1867) under the Government of British India, although originally Governor Ord had planned for it to be named “Edinburgh Bridge” because it was first used during the visit of the Duke of Edinburgh to Singapore.

Governor Ord eventually relented when members of the Singapore Legislative Council decided that it should honour and perpetuate the name of the last Governor appointed by the British East India Company to Singapore.

Cavenagh Bridge was the last major project undertaken by Indian convict labour in 1869.

Cavenagh Bridge was opened without ceremony. It was designed by Colonel G.C. Collyer, Chief Engineer of the Straits Settlements, with R.M. Ordish, of the Public Works Department, then under the charge of John Turnbull Thomson.

Its steel structure was shipped out from Glasgow by P&W MacLellan, and constructed by these P&W MacLellan Engineers of Scotland of the Clutha Ironworks: the same company that had built the cast iron Telok Ayer Market.

The Cavenagh family coat-of-arms can be seen on the cross-beams at both ends of the steel structure. The bridge linked Commercial Square (Raffles Place) and the government quarter, an essential alternative to get to the Post Office, replacing the ferry crossing which had cost a duit (“one cent”) per ride.

Although Cavenagh Bridge had trams trundling across it, all heavy traffic was diverted to the Anderson Bridge when it was built in 1909. Cavenagh Bridge was declared off limits to ‘vehicles exceeding 3 cwts, cattle and horses’, then was converted into a pedestrian bridge.

Unfortunately, the bridge had not been designed to make allowances for the tides and as late as 1983, the bumboats (tongkangs in Malay or twa-koh in Chinese) plowing the river had to wait for low tide before making their way under the bridge.

In 1987, Cavenagh Bridge underwent a five-month refurbishment by the Public Works Department (PWD), to preserve and strengthen its structure.

The restoration work cost a total of $1.2 million and the bridge was reopened on 3 July 1987. Today it is the oldest bridge across Singapore River.

The archived photos of Cavanagh Bridge in the 1900s are curated on this blog to share the nostalgic  memories of Singapore, courtesy of the National Archives of Singapore (NAS) and other unnamed generous contributors.

It ‘helped’ his friend get hitched

According to Chinese belief, if a woman throws an orange into a river on Chap Goh Mei, the last day of Chinese New Year, she will get a good husband.

More than 10 years ago, Mr Kelvin Ang, advised his friend to do just that.

In 2001, before the stroke of midnight on Chap Goh Mei, his friend threw an orange from Cavenagh Bridge into the Singapore River. A year later, she met the man who would become her husband.

And Mr Ang, 42, the director of conservation at the Urban Redevelopment Authority (URA), is now godfather to the couple’s first child, a Primary 4 pupil, aged 10.

This is why Cavenagh Bridge, the oldest bridge across the Singapore River, holds special significance for Mr Ang.

He is one of the first contributors to the SG Heart Map, a nationwide project where people share the places in Singapore which hold a special meaning for them.

… The Cavenagh Bridge, built in 1868, was given conservation status by URA in 2009 and it is its historical significance that also intriques Mr Ang.

The avid reader pointed out that it was mentioned by famous author Joseph Conrad in some of his novels.

Mr Ang revealed another fun facts: The Fullerton Building (now Fullerton Hotel) and Cavenagh Bridge used to be known by people in the river trade as “husband and wife”.

He said: “Both the Fullerton Building and the Cavenagh Bridge are under conservation now and I think it’s romantic that many people choose to take their wedding pictures at the bridge, with Fullerton as the backdrop.”  (Souce: The New Paper) 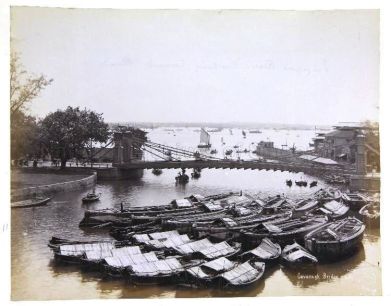 The photos (above & below) of Cavenagh  Bridge taken in 1899 contributed by The National Archives, United Kingdom to NAS. 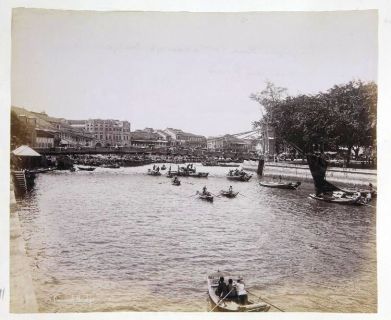 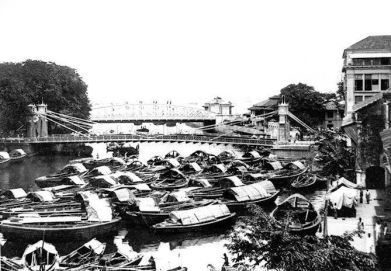 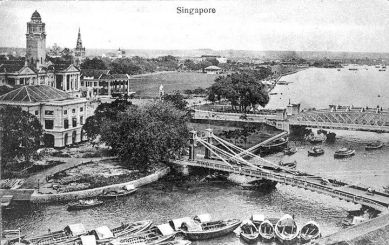 Recently, I discovered crazy things to prompt me to act instinctively, just do it like Nike’s ad to coax me.

Nothing to harm anybody by words or deeds, kill insects or animals, done anything against the law or illegal 🙂

I am speaking about my blog to walk and walk to blog to express myself.

On my walk down my memories to Singapore River this morning, the sky was bright and sunny.  What a blessing day, I thought?

Unexpectedly after my photo shoot mission was completed several hours later, it started to rain heavily like dogs and cats.  Thank goodness its not a wasted day. Job done!

Please share what I have done despite my forgetfulness during the monsoon season and didn’t bring along an umbrella.  Someone please remind this old man. 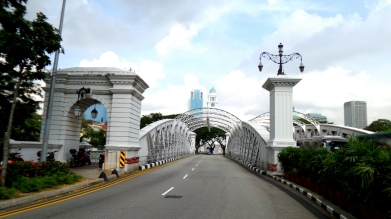 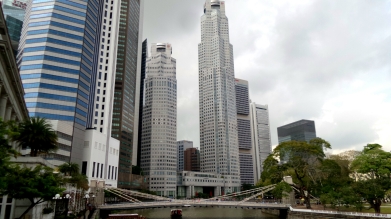 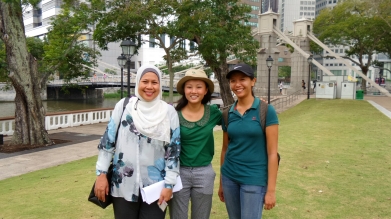 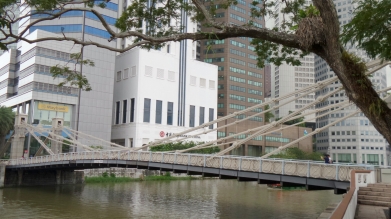 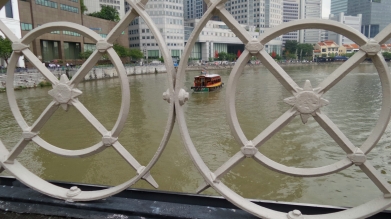 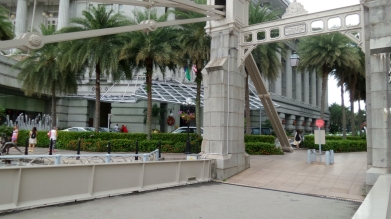 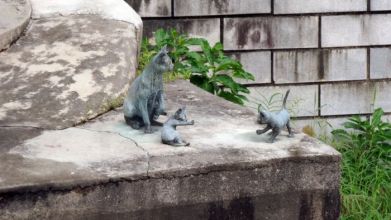 The bronze sculpture of the Kuchinta Singapura at the Cavenagh Bridge, at the bank of the Singapore River.  The Singapura Cat a.k.a. Kucinta (Kuchinta) is regarded as Singapore’s Tourism Board’s mascot. The Cat Fanciers Association in the US gave the Singapura cat pedigree status in 1988. 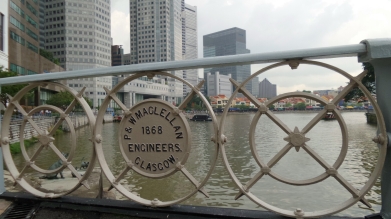 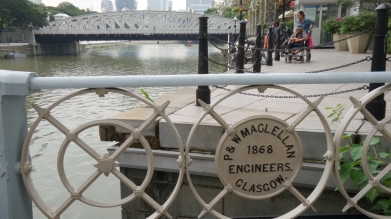 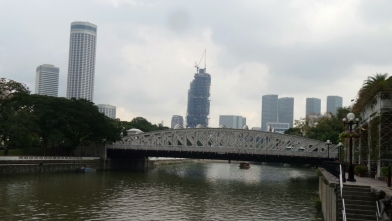 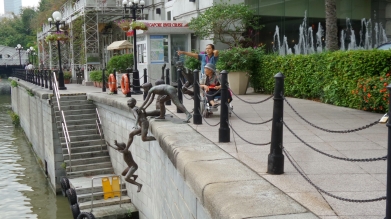 “Look, Ah Ma, those naked children are swimming in the Singapore River.” 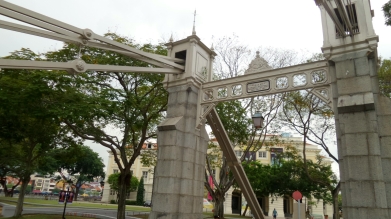 I am now a roaming, roving “time traveller in a time machine”, a “memory tourist” of my home.

It is a worthwhile trip to walk, blog, experience and remember for posterity. All accomplished today to share with my Singapore memory friends. 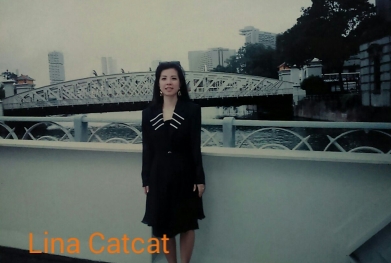 Lina Catcat stood behind Cavenagh Bridge in 1990 and The Fullerton Building now known as Fullerton Hotel officially opened in 2001 (formerly GPO). Behind was Hongkong  & Shanghai Bank. 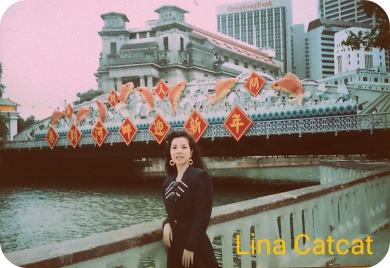 These photos were taken during Chinese New Year in 1992 with my boyfriend (now my hubby) before that I was with my three best friends aka sisters strolled along Singapore River n bridges in 1980s before we met our love life and eventually were married in late 1990.

A youth like me stood at Clifford Pier along Collyer Quay in 1983/4. Behind me were bumboats at Singapore River.

Memorable photos with courtesy of Lina Catcat with her description to share on this heritage blog.

“Explosion” at Cavenagh Bridge in 1902

According to a 112-year-old newspaper report in The Singapore Free Press and Mercantile Advertiser (1884-1942), 10 April 1902, Page 3.  Headline [THE “GREAT” EXPLOSION].  (Source courtesy of NewspaperSG, National Library Board).

This morning were fired the heavy charges of dynamite that have been laid in tunnels cut in the rock that lies at the mouth of the Singapore River.  A full account of the preparations was given in our yesterday’s issue, and there is really not much else to say.

By the way of precaution the Government buildings from the Post Office eastward were vacated, and the valuable instruments of the Time Observatory removed.  Traffic across Cavanagh Bridge was stopped, and it was kept clear of foot passengers.  The Marine Police had a boat and launches kept out boats from the mouth of the river – in fact every precaution was taken.

The firing party of Royal Engineers was under command of Capt. Mildtred, R.E., Lt. Butterworth being also present.  The battery and firing table was placed under a tree by the side of Cavanagh Bridge, the cable being brought up there from the mouth of the river.  There was quite a party gathered to see His Excellency the Governor press the key.  The hon’ble Major Murray and Mr Gaffney represented the P.W.D. and Mr W. Adam, who has been in charge of the work, looked after the men coming up from the shaft where they had been completing the tamping and clearing.  Among others present were Hon’bles W.J. Napier and G.S. Murray, Mr Grigor Taylor, Dr Kerr. P.C.M.O. (who returned to the Colony yesterday), and several ladies.

At 11.40 the word was given that all was clear, the connections were screwed up, the Governor pressed the firing key and the charge was exploded.  The main effect was a strong earth-tremor that shook all buildings within a considerable radius.  The suspension rods of Cavanagh Bridge were vigorously rattling, and a column of water shot up about twenty feet at its highest point.  The air disturbance was remarkably small, nor was there any wave produced.  A minute later, all the bubbles had subsided, and the fears of those who thought the charges too great were proved to be groundless.  In fact the explosion was quite a pretty and tame function.

It may be mentioned that the Dynamite known as the “Devil Brand” was supplied by Messrs Guthrie & Co. and has been used throughout the mining operations.

The effect of the explosion on the rock is of course yet to be seen, but as regards the boring and firing it seems to have been quite a success.  The iron shaft and its staging above the water were not even disturbed.

One thought on “Bridging the Present to the Past”