Once dubbed as a technology dinosaur Dick Yip is a winner of the Active Agers Infocomm Champion Award 2008 and unfazed about technology today.

I am very glad to attend Unk Dicko’s talk at the library@esplanade on 8 October, 2014.

Both Unk Dicko and I are Friends of Yesterday (FOYers) for several years and we share our mutual moral support and encouragements at our personal blogs and Facebook to enjoy our “hobbies”.

We had a “Foodage” video here .

But I learn more about him from his enlightening talk to learn and share from his personal experiences to explore his IT journey with painstaking and emotional lessons.

Unk Dicko spoke about the computer technology in the 1980s at an early transition stage when schools in Singapore was computerised at full speed. The teachers had to learn and use computers before they could teach their students … to embrace the digital world.

I wouldn’t want to miss Unk Dicko’s public talk “Embracing the Digital World” because this “Wise Old Owl” friend with the best advices and words of wisdom to learn from his knowledge and experiences.  The honor and privilege to have a photo with Unk Dicko at the Esplanade for our keepsake.

Although he is about 10 years my senior,  he wasn’t born in the “technology dinosaur” in Singapore.  Singapore is a global city plugged to the advanced communication technology and Internet.

As long as our pioneer generation Singaporeans are willing to embrace the digital world, Unk Dicko would be prepared to teach us at a mutually convenient time and place.

The best way to contact Unk Dicko is to drop him an email or his blog or Facebook.  He would appreciate a sincere enquiry from any willing learners asking for help for lessons on the Internet.

He is like a “Mr Google” to show you where to find the solutions and answers in an appropriate forum all over cyberspace.  There are good, bad and ugly people in the world and on the Internet, so the information found on Google must not be accepted just as the gospel truth.  Although there are gems to share, there are also funny or crazy people who waste your time everywhere.  We will eventually learn the places with trustworthy, reliable and official places.

Unk Dicko’s presentation with appropriate slides in a friendly, relaxed style with his special brand of humour. 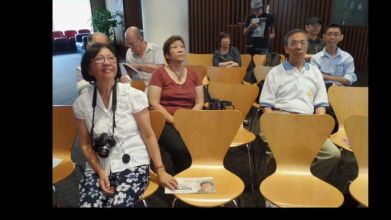 Mrs Daisie Yip with blessings for the successful completion of Unk Dicko talk at library@esplanade on 8 October 2014.

His talk was in chronological order to tell the stories in sequence to follow and understand.  He avoided complicated “computerese ” , the jargon and technical terms associated with computers and their operation.  He explained in simple, straightforward English language not to impress the audience  with bombastic words or lingo.

He shared personal experiences on technology and provide useful tips on blogging and Facebook.  Unk Dicko has conducted countless courses organized by the community and voluntary organisations to many senior citizens who do not have background on knowledge of IT and Internet and still going strong with his passion and energy.

He is a living example of a “technology dinosaur” once upon a time, and now an “Infocomm IT Champion”.   “If I can do it myself, others can do it too”.  Unk Dicko encourage and motivate our pioneer generation IT learners.

Revolution of computers in schools in Singapore. 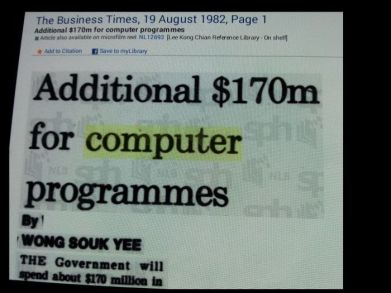 In the 1980 at the early stages of computerization in Singapore , the transition of teaching with chalks and blackboard to switch the revolutionary methods of teaching with computers.  The teachers had to learn and use computers to teach the students and administrative work in school  … to embrace the digital world.

While listening to Unk Dicko on this topic, I was reminded of a friend who was working as an IT technician in a secondary school where most of the teachers were elderly and have not touched computer keyboard and computer mouse.

Some teachers would prefer to resign with only a few more years for them to retire.  Learning a new method to switch to the teaching  with computers was stressful.  They were teaching the old ways and teaching aids for half a century to them.

However,  Unk Dicko is a survivor who persevere and adapt to the revolution of the digital world.  He learn and share no matter how tough the technology transformation with everyone else.

In the mid-1980s, he was teaching at Hwa Chung Junior College at it was a challenge to produce top students in Singapore with outstanding results.

He was using manual typewriters and school notes were printed on cyclostyle machines.

The  Three Angels of Unk Dicko

The first Angel to bless Unk Dicko was Ms Thanam, a collegue in Hwa Chung Junior College who helped him to use the computer to submit school reports and other administrative work for him.  He is very thankful to Ms Thanam, for his job was saved and survived without using computers.  Ms Thanam subsequently returned to India .

The second Angel, Ms Evelyn Chin who was very helpful to perform his computer work speedily and efficiently at Serangoon Secondary School.  Unk Dicko managed to survive 7 years at the school with Evelyn’s good relationship and positive mindset.

Evelyn Chin attended the talk and Unk Dicko invited her to raise and  profusely thanked her as his second Angel.  A loud round of applause from everyone to cheer Evelyn. 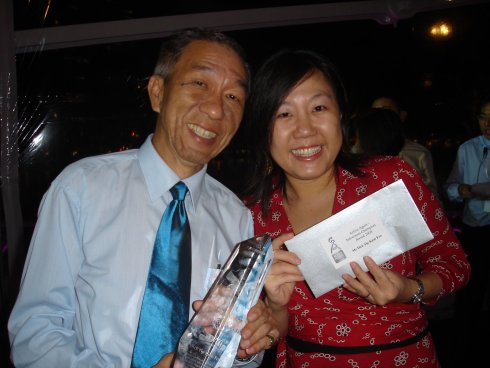 Unk Dicko was awarded the Active Ager Infocomm Champion 2008 on 4 October 2008.  He shows that age is no barrier to rocking the cyberworld (he went from self-confessed IT dinosaur to master blogger!

Dora nominated him for this award and she is proud that he was selected as the winner.

Unk Dicko’s third youngest daughter Dora is his third Angel in his life.

Dora suggested that her Dad should start a blog for him to be meaningfully occupied and do many stuff to help the senior citizens on the Internet and community.

She was very concerned about him after Unk Dicko injured  “Achilles heel” during a badminton match in 2006.  When Unk Dicko recovered from the injury 8 months later, he never looked back and started “The Wise Old Owl”  nostalgia blogs for everyone to share and enjoy.   He found the discovery of Google,  useful and helpful online forums for Internet users all over the world.